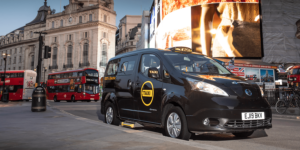 The British Dynamo Motor Company has presented its growth plans. The company plans to hire 275 new employees and increase their conversion capacity to 10,000 vehicles annually by 2026.

It also plans to introduce two new electric models, a wheelchair accessible vehicle and a van – so far Dynamo Motor is reportedly best known for converting the Nissan e-NV200 Evalia into an electric taxi. The growth to 10,000 converted vehicles in five years would be enormous: last year, around 170 e-NV200s were converted by Dynamo Motor. According to earlier information, the company had actually planned sales of 500 units for 2019 – however, production also only started in 2019.

The production location will continue to be Great Britain, or more precisely, the plant in Coventry is to be expanded. Dynamo Motor sees the greatest potential primarily in taxis and vans. “We’re on a mission to change the way people get around in the UK, especially in built-up areas like cities where pollution is a problem,” says company founder Brendan O’Toole.

Details of the two new models – such as the source vehicle for the conversion – are not known. In the case of the e-NV200, however, it is worth noting that Dynamo is not adapting the powertrain, but is relying on the Nissan’s e-drive with its 40 kWh battery. The conversion work mainly concerns the bodywork in order to meet the specifications for a London taxi. It is not known whether Dynamo will do the same for the two new models or also convert the drive system.

To fund its planned growth, Dynamo has launched a crowdfunding campaign on Seedrs. Within about a week, over 1.6 of the targeted 2 million pounds have already been collected – the equivalent of 1.87 of 2.34 million euros. Specifically, at the time of writing, Dynamo has had £1,627,245 pledged by 381 investors – if the funding target is reached in the next 16 days.

According to the crowdfunding campaign, the company is valued at £15.5 million. The two million pounds thus correspond to 11.45 per cent of the shares, a share certificate costs 15 pounds.