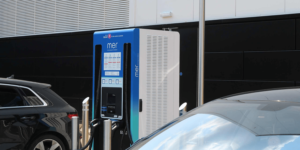 Both Mer and Octopus are committed to using 100% renewable energy sources and enabling roaming to make EV uptake ever easier. Octopus users can now charge at Mer charging points using their EJN app or RFID card. The cost of the charge then goes on their monthly home energy bill.

Octopus Energy had launched its roaming charging service, the Electric Juice Network, in May 2020, as reported, first adding the Char.gy network. EJN now includes a third of the markets charge point networks, including Ionity, according to the company’s statements.

For Mer, the company is backed by Norwegian energy giant Statkraft and was previously known as Gronn Kontakt in the UK. Mer offers high power and fast charging and says it focuses on installing EV charging points into “high-usage, high-footfall locations” like workplaces or car parks and residential areas where people don’t have access to their own garages or driveways.

When (re-)launching in the UK, Mer Country Manager Anthony Hinde, said: “The lessons we have learned from Norway – where the majority of new car sales are now electric – is that installing EV chargers into workplaces and more broadly into community locations, and switching fleet vehicles to electric, will be a critical element to the success of the green-vehicle transition.”

Apart from Norway, Mer is also building out EV infrastructure in Sweden and Germany. The company estimates that the UK market will require 400,000 additional public chargers by 2030 if the government makes good on the ban on fossil-fuel-powered cars.

Statkraft had acquired Mer in late 2019, following the acquisition of German EV charging firm E-Wald in the same year. Since then, the Norwegian utility has also acquired Vattenfall’s UK charging business.