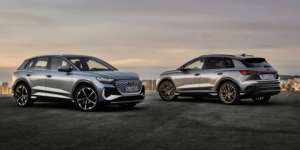 Following the sales debut of the Audi Q4 e-tron and Q4 Sportback e-tron in April, two further variants are now expanding the portfolio: The Q4 Sportback 40 e-tron, the model with the longest range in the series, and the Q4 45 e-tron quattro as an all-wheel drive variant are available to order now.

The technical data for the Q4 Sportback 40 e-tron have basically been known since its unveiling, it is the familiar 77 kWh battery (net, gross: 82 kWh), the power of the e-motor is 150 kW. While Audi gave a provisional WLTP range of 528 kilometres in April, the final values have now been determined. With 534 kilometres in the standard test, the Sportback not only slightly exceeds the preliminary figures, but is also the variant with the longest range of the Q4 range with this body/drive combination.

This variant was thus already presented, but not yet available to order. That is now the case, according to Audi. The Q4 Sportback 40 e-tron will cost at least 49,500 euros – and thus 2,000 euros more than the Q4 40 e-tron with “classic” SUV bodywork.

The “small” all-wheel drive has a system output of 195 kW, the torque is 425 Nm. The model is said to be able to accelerate from a standstill to 100 km/h in 6.9 seconds. The top speed is electronically limited at 180 km/h. Audi is asking 50,900 euros for the Q4 45 e-tron quattro – so far only the SUV version has been announced here, there is no Sportback with this drive (yet), even the current price list only lists three drive variants for the Q4 Sportback e-tron.

Like the aforementioned Q4 Sportback 40 e-tron, the new Q4 45 e-tron quattro uses the 77 kWh version of the battery. The range is between 412 and 490 kilometres, depending on the equipment, and Audi gives WLTP consumption of 17.9 to 21.3 kWH/100km. The AC charging capacity is 11 kW, and up to 125 kW is currently possible at a DC charging station – an update has already been promised, but details are not yet confirmed.

The towing capacity of the Q4 45 e-tron quattro is the same as the larger all-wheel-drive model: 750 kilograms unbraked, 1,200 kilograms braked – both at eight and 12 per cent gradients.

Daimler to present the EQE at the IAA