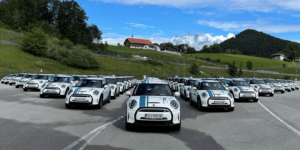 The Austrian company Biogena has taken delivery of 82 all-electric Mini Cooper SE for its employees. This is now the largest electric Mini fleet in Austria.

According to the carmaker, Biogena allowed all employees to order a branded Mini Cooper SE on a company lease at the beginning of the year. As part of this campaign, 82 vehicles were ordered, which were finally handed over this July. However, BMW does not provide any details about the conditions under which employees can use the Mini vehicles.

Biogena is an Austrian family-owned company specializing in the development, production and marketing of premium micronutrient preparations. The company says it is committed to a sustainable strategy that includes “ecological products, reforestation and efficient environmental protection.”

BMW states that it has sold more than 30,000 units of the Mini Cooper SE worldwide since its launch in 2020. However, when unveiling the model in summer 2019, BMW had still stated that more than 40,000 interested parties had already registered at that time.

In March, the Group also confirmed plans to transform Mini into a pure electric car label. 2025 will be the last time Mini will launch a new model with an internal combustion engine variant – after that, only purely electric models will follow. In 2027, the share of fully electric vehicles in Mini sales is to be at least 50 per cent. “In the early 2030s”, Mini will then have an exclusively electric model range, the carmaker reckons.