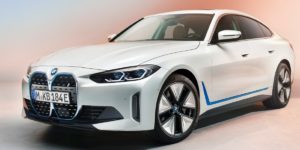 BMW Group is intensifying its e-mobility advance and confirms plans to transform Mini into a pure electric car label. Besides, the German carmaker showed the series version of the BMW i4 for the first time.

The BMW Group confirmed that which had already been leaked in advance: 2025 will be the last time Mini will launch a new model with an internal combustion engine variant – after that, only purely electric models will follow. In 2027, the share of fully electric vehicles in Mini sales is to be at least 50 per cent. “In the early 2030s” Mini will then have an exclusively electric model range, BMW says.

In 2023, BMW will produce the successor to the Mini Countryman at the Leipzig plant, including a purely electric variant. Based on the planned new vehicle architecture developed from the outset for pure e-mobility, battery-electric Mini vehicles will also be produced in China from 2023 onwards in a cooperation with the local manufacturer Great Wall Motor.

The BMW brand is also sharpening its own electric car plans. After the market launch of the iX and i4 as new electric models this year, and the commercial launch announcement for the iX, the BMW Group wants to have at least one fully electric model on the road in around 90 per cent of its current market segments by 2023. The manufacturer calls this “breadth over niche”.

BMW also showed the production version of the i4 for the first time at their annual press conference. The i4 retains the large but closed radiator grille of the concepts and the 4 Series with a combustion engine. Similar to the iX3, several blue design elements indicate the electric drive. Despite the close relationship to the 4 Series, there are some differences in detail, not only at the front and rear apron: In contrast to the 4 Series, the i4 has aerodynamically better door handles, to name just one detail.

BMW does not provide further technical details on the i4, but repeats known key data: The i4 model series will be available in different versions, which should allow ranges of up to 590 kilometres (WLTP) and up to 300 miles (EPA). The power output is up to 390 kW in the top model. Data such as battery size, charging capacity or the drive power of the weaker variants are not mentioned. On the other hand, BMW confirmed the rumour that they would launch the i4 three months earlier than planned.

In 2023, there are to be twelve all-electric models. With the currently available i3, Mini SE and iX3 and the i4 and iX announced for this year, that would be five EV model series – unless BMW counts the i3 and i3s as independent models. These models would then be joined by an electric 5 Series, an electric 7 Series, the iX1 and the aforementioned successor to the Mini Countryman, as well as “other models”.

“We have a clear roadmap for making the transformation of our industry a real competitive advantage for BMW in the coming years: uncompromisingly electric, digital and circular,” BMW CEO Oliver Zipse said, according to his company’s statement. “The launch of the BMW iX* and the BMW i4 will signalise the start of our technology offensive in 2021: these two all-electric vehicles will set the benchmark for BEVs going forward.”

By 2025, sales of pure electric models are expected to increase by an average of well over 50 per cent annually, more than a tenfold increase compared to 2020. In total, the company wants to have delivered around two million purely electric vehicles to customers by the end of 2025. This electric vehicle segment growth should not be at the expense of profitability, as BMW demands that the Ebit margin should be between six and eight per cent in the 2021 financial year.

“2021 is all about growth for us. At the same time, we are prepared to react flexibly,” says CFO Nicolas Peter. “We always think and act for the long term and, with the right decisions today, we are creating the conditions to achieve our ambitious strategic goals for 2025, 2030 and beyond.”

Incidentally, Peter reported a group turnover of around 99 billion euros for 2020, with the Corona-related decline being “moderate”. The group’s pre-tax profit was 5.2 billion euros, the group’s pre-tax return on sales was 5.3 per cent. However, in view of further announcements, BMW itself put the business figures in the background.

Based on its current market expectations, the company expects at least 50 per cent of its global sales to consist of fully electric vehicles in 2030. Overall, the BMW Group says it plans to put around ten million all-electric vehicles on the road in the next ten years or so.

As BMW states, it is currently in phase 2 of the transformation. The first phase was the pioneering work with Project i, from which the i3 emerged. Phase 2 is the current transformation of the model range with flexible platforms. After 2025, the product range will be realigned with the “New Class”. Three aspects are important for the planned vehicle class: “a completely redefined IT and software architecture, a newly developed and high-performance electric drive and battery generation and a radically new level of sustainability over the entire life cycle”.

MG Motor to expand into Europe