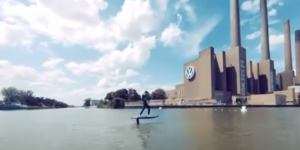 Just one for the books – a video in which VW boss Herbert Diess thanks his employees while mastering an Audi e-surfboard.

You may also call the performance a standing “surfation” with which Herbert Diess was thanking all Volkswagen employees while riding the waves of success. The company is back on record levels of revenue after the first half of this year, news that clearly put Diess in a super mood.

“I want to thank our employees for a sensational first half of the year! It was difficult, but we achieved an enormous amount together. Thank you very much for your efforts,” Diess tweeted after sending the video round in an email.

What is more, the surfboard is an in-house development, at least almost. Therefore, the video doubles as an advertisement for the e-tron e-foil surfboard from Aerofoils, a company founded by Audi developer Franz Hofmann.

However, flying over water with the E-tron-Foil is not at all cheap: The RRP for the board is 12,499 euros, 2500 euros more than a current Skoda Citigo. Still, “I’ve ordered one,” added Diess.

youtube.com, automobilwoche.de (both in German), twitter.com