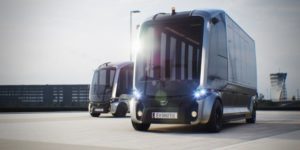 The US battery manufacturer Microvast and the Austrian start-up eVersum have announced that they will jointly develop battery solutions for the electrification of eVersum’s product line. The products are to be manufactured in Microvast’s European factory in the long term. The first prototype battery system for eVersum’s ‘eShuttle’ has already been delivered and is currently being tested.

Microvast anticipates a potential supply of battery systems worth more than €100 million over the next six years, according to a press release. A framework agreement between the two companies is currently under consideration and is expected to be signed in the “near future”.

eVersum’s electric shuttle bus has been available since this year. The vehicle has a modular design and is intended for use in city centres and airports. Depending on the configuration, it weighs up to twelve tonnes and can transport between 15 and 50 passengers.

The ‘eShuttle’ is equipped with an electric motor of up to 225 kW, the drive runs at a nominal voltage of 650 volts, the peak torque is 1,430 Nm. The lithium-ion battery is said to be between 58 and 174 kWh, depending on the variant. eVersum also claims a service life of 8,000 to 15,000 cycles. According to the start-up, the range is to be up to 300 kilometres at 75 per cent capacity on flat terrain.

Microvast’s European headquarters in Ludwigsfelde near Berlin, from where the products for eVersum will now also come, was opened on 1 February this year, as reported. The location comprises 600 square metres of office space as well as production. Only in July, the company had raised around 822 million dollars on the Nasdaq through an IPO via a merger with Tuscan Holdings Corp.

According to Microvast, eVersum is a “a high-tech vehicle OEM, specialized in the design, development and build of the most purposely engineered electric commercial vehicles for passenger transport.” The company is headquartered in Austria. Development and production sites are also reportedly located in the country as well as in Slovenia.