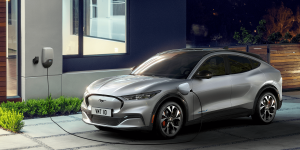 Due to a lack of sufficient semiconductor chips, some Ford customers will receive their Mustang Mach-E several weeks later than planned. The car manufacturer informed customers in an email that the delivery of certain vehicles will be delayed by at least six weeks.

Specifically, this concerns those Mustang Mach-Es that were or were to be produced between 5 July and 1 October, according to the customer email posted on the Mach-E Forum. Ford blames the delay on the “global shortage of semiconductor chips”.

“The global semiconductor chip shortages are affecting our ability to keep up with demand. While that’s no excuse, it is a reality,” the letter states. “Once your vehicle receives the required chip, your vehicle status will be updated and you will receive an email with the expected week of delivery.” However, Ford does not specify which chip is involved.

As compensation, affected customers will receive 250 kWh of free charging – which, however, can only be used in the Ford Blue Oval Charge Network. A corresponding mail to German customers and a comparable charging offer is not yet known.

For the American and European market, the Mustang Mach-E is built in Mexico. In China, Ford is building the electric SUV in a joint venture with partner Changan for the local market.