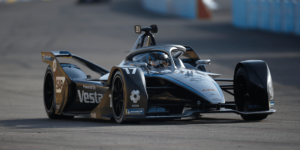 Before the races on the final weekend in Berlin, de Vries had the best starting position as championship leader. Statistically speaking, more than half of the drivers still had a chance of winning the world championship. Realistically, more than five drivers could seriously hope to be the first driver ever to call themselves a Formula E world champion.

Saturday’s race on the traditional Formula E circuit on the apron of Tempelhof Airport, in Berlin, was not the early championship win de Vries had hoped for. Initially, the Dutchman remained without points, while rivals Edoardo Mortara (Rokit Venturi Racing) and Mitch Evans (Jaguar) finished second and third on the podium and thus scored important points.

The race win on Saturday went to former champion and Audi works driver Lucas di Grassi – with less than two-tenths of a second ahead of Mortara. For Team Audi Sport Abt Schaeffler, it was the 14th and the last victory in Formula E since Audi will withdraw from the electric racing series after this season. It was the third victory by an Audi driver in Berlin after 2018 and 2019.

Although de Vries continued to lead the championship going into Sunday’s decisive race on the inverted layout of the circuit, his podium finish on Saturday and his good starting position meant that Jaguar driver Evans had the best cards at the start. Then disaster struck for Jaguar when Evans’ Jaguar stopped at the start and finish straight due to a technical problem.  Some drivers were still able to avoid the motionless vehicle on the track, but not fellow favourite Mortara of all people. After a violent collision, both drivers were eliminated and the race was interrupted for a short time.

On the first lap after the restart, there was another championship-deciding incident: BMW driver and London winner Jake Dennis retired after colliding with the wall. A little later, Saturday’s winner di Grassi pushed last year’s champion Felix Antonio da Costa in the DS Techeetah into the wall. For da Costa, the accident meant retirement, for the Audi driver, the subsequent drive-through penalty was the end of his championship hopes.

In another race, Mortara’s teammate Norman Nato took the win ahead of Oliver Rowland in the Nissan and Stoffel Vandoorne in the Mercedes. The latter’s teammate de Vries finished eighth, making him the only one of the top seven to score points in the championship standings – making him the world champion with 99 points in 15 races. Before the final weekend and the two races in London, Vries was only in tenth place in the drivers’ standings – the two second places in London were decisive in the end because even without the points from the last race of the season, the Dutchman would have remained at the top. Second place went to Mortara (92 points) ahead of BMW driver Jake Dennis (91 points). He was followed by Evans (90), Envision Virgin driver Robin Frijns (89), Jaguar driver Sam Bird (87) and Lucas di Grassi (87) – it was very close right to the end.

Teammate Vandoorne’s third place meant that the Mercedes-EQ team also clinched the title in the team standings. With the 23 points from the last race (including the three extra points for Vandoorne’s pole position), Mercedes still managed to knock the Jaguar team off the top spot. The Brits could only register six points from Sam Bird after the early exit of title favourite Evans in the final race – in the end it was 181 to 177 points in favour of Mercedes. The DS team followed a little way behind (166 points), just ahead of the Audi team (165 points) and the Audi customer team Envision Virgin, who tied on points. Team BMW i Andretti ended up in sixth place with 157 points.

Despite the high after the double title win in Berlin, there could soon be a low for the Mercedes team:  the team has decided to pull out after the coming season. The decision not to enter the next generation of cars will be officially announced in the middle of the week. The Mercedes team had so far not made any commitment for the Gen3 racing cars, which are to be used from the season after next.

This would mean that the Mercedes team would follow Audi and BMW with a one-year delay. For the two factory teams, Sunday’s race in Berlin was the last Formula E race, for which the exit had already been announced some time ago.

Polestar 2 priced in the USA