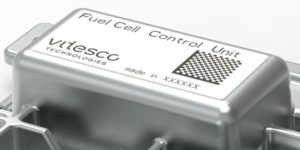 Vitesco Technologies has announced that it is developing a control unit for fuel cell applications. The Fuel Cell Control Unit (FCCU) is to go into series production in the second half of the decade.

According to Continental’s drive division Vitesco Technologies, the FCCU will make its own “comprehensive electronics expertise” available for fuel cell applications. The unit is to be used in heavy fuel cell trucks and off-highway applications.

As the central control unit of the fuel cell system, the Fuel Cell Control Unit will control and monitor all components. the German company is not yet going into detail about the functions of the control unit. The  FCCU is to be built in series from the second half of this decade.

Concerning the series production of the FCCU, as Vitesco CEO Andreas Wolf says, “The agility and flexibility with which we developed the FCCU, which is a prerequisite for success in this dynamic market environment, is combined at Vitesco Technologies with comprehensive expertise in industrialization built up over decades.” Wolf explains “This is why we will implement volume production with the same speed and quality as the development work.”

In March this year, Vitesco announced that it would be aiming for 30% profits from electrification. In April, Stellantis announced that three electric transporters from Opel, Peugeot and Citroën will also be offered with a fuel cell system this year, that will sport a 100 kW drive from Vitesco Technologies.