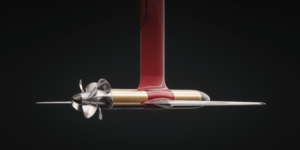 The company’s superlative claim is based on the motor’s difference: Other boat motors – be they electric or fossil-fuelled– are usually situated in a box above the waterline. The Candela C-POD gets rid of the gears and the motor is mounted under the water in a toperdo-like socket, directly driving the propellers. This way, each motor is coupled to a propeller which means that friction losses are minimised. For high propeller efficiency, the company has used contra-rotating propellers.

The company points out that the added advantage of placing the motors under the water is that this also helps keep the motors cool. The Candela C-POD slim pod drive is directly and efficiently cooled by the flow of seawater, thereby enabling higher operating temperatures and extracting more power from the motors.

Gustav Hasselskog, Candela’s Founder and CEO explains: “The first obstacle towards a very small high-power motor is heat. You can take any motor and give it three times more electricity than it is rated for. It will work. But only for a few seconds. Then it melts. With Candela C-POD, we have almost unlimited cooling power – we just need to get heat from the coils to the surrounding water flow.”

He explains that the engineering challenge was to make the electric motors compact enough since they have to have a very small diameter in order to cause minimal drag. Given that power is torque times rpm – Candela opted to increase the rpm and lower the torque to boost the Candela C-POD’s power density. The solution was to split the thrust needed on two propellers. Splitting load on two propellers allows for propellers with a smaller diameter and thereby higher rpm – and in turn, smaller motors that, of course, also suit the motors’ underwater position.

Those looking to equip boats with electric motors will soon find out that there are numerous other advantages: far, far less noise, no smell, and far fewer moving parts means virtually no maintenance. In addition, governments are looking to tackle maritime emissions and will no doubt soon be introducing the kind of emissions limits that cars are increasingly becoming subject to.

All of this is nothing new to Candela, a company that just recently presented the Candela P-12, an electric water taxi for twelve people. Almost a year before, the company launched its all-electric hydrofoil speedboat with a 92 km range.