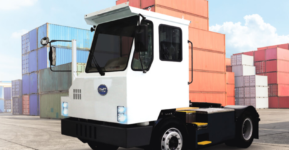 BYD says that the Red Hook fleet represents the single largest deployment of zero-emission battery-electric trucks in the eastern United States and the first at a Port Authority of New York and New Jersey marine terminal.

Red Hook operates the cross-harbour barging operation that takes tens of thousands of truck trips per year off the roads of New Jersey and New York. Red Hook is active in the development of and use of clean energy and technology. One such example is the offshore wind port project in the Port of NY/NJ.

“These zero-emission electric yard tractors do not represent the finish line as far as meeting the seaport’s goal to reduce emissions. But it’s a major step forward,” said Sam Ruda, director of the Port Department of the Port Authority of New York and New Jersey. “It affirms both that the technology is developing rapidly and is applicable to container terminals, and it underscores the role the public and private sectors are playing in making it a reality. Electrifying these yard tractors is strong evidence of how the Port Authority and its partners are moving forward to reduce emissions impacts from cargo operations.”