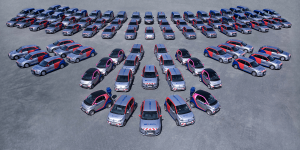 The ICCT, in a new briefing, looks at electric carsharing in Europe and North America and provides detailed insights into charging infrastructure needs and best practices gained from successful carsharing schemes. Crucially, EV sharing programs can reduce GHG emissions by up to 43%.

This is when looking at daily travel per user compared to previous modes of travel. The ICCT adds that electric carsharing exhibits the benefits of conventional carsharing schemes, such as an estimated reduction in vehicle kilometres travelled per household of between 3% and 36%. Moreover, for each car-sharing car, between five and 24 private car purchases were suppressed or postponed, says the ICCT, thus increasing public parking space availability by similar numbers.

The working paper also offers one of the more comprehensive market overviews, including 17 different electric carsharing programs with fleet size and corresponding charging infrastructure (page 7). The table also shows the average number of public chargers per square kilometre for programs that operate in zones. Take Volkswagen’s WeShare in Berlin as an example. The ICCT lists 1,600 EVs utilising 140 chargers at grocery stores after hours and 1,020 public chargers.

How many chargers does a shared EV need?

The study considers infrastructure a key factor for the success of electric car-sharing. The ICCT recommends a minimum charger density of seven chargers per square km equally distributed throughout the zone. Staying with the example of Berlin, this recommendation suggests that Berlin would ideally contain at least 1,220 chargers to achieve sufficient coverage for its vehicles, so it is close.

To illustrate what happens when there are not enough chargers, the ICCT uses the example of Car2Go in San Diego, where the staff was responsible for 16% of trips made through the program. The employees were tasked to collect EVs at low battery levels and drive them to the depot to recharge due to a lack of available charging infrastructure.

What is more, the ICCT distinguishes not just the three types of BEV sharing and the corresponding charging needs but also the issue of managing the battery state-of-charge.

The ICCT also calculated the charge time per shared electric car, finding that 48 minutes of charging per day is required in Europe and 1.2 hours or 1 hour 12 minutes in the United States. This is also indicative of the impact of carsharing on the public charging system. Here the ICCT took the number of kilometres a carsharing car completes per year as a basis.

Which car-sharing model is right for a city?

While the ICCT considers public funding likely to aid the most city and car sharers to introduce a scheme, this also depends on the business model of the scheme. For example, the organisation found that electric station-based schemes still operating result from public tenders or demand, as opposed to private initiatives, and benefit from public funding, whereas most of the electric free-floating ones do not.

However, the ICCT notes that many successful free-floating schemes benefit from non-financial public support, i.e. parking policies, community outreach, or accessibility benefits. The organisation calls on city officials and policymakers to include parking policies for carsharing to be at least equal to those for private cars. To encourage electric vehicles, city parking may also be given away as an in-kind contribution.

Further recommendations include city strategies with the ICCT looking at Copenhagen, Paris, Madrid, Milan and Ghent in more depth (page 9). Notably, carsharing in the French capital is 100% electric, whereas Copenhagen showed the highest reduction in greenhouse gas emissions (-9% to -43%) with EV carsharing charged through a clean electricity grid.

Another factor is how densely populated a city is to figure which car-sharing model may be best. As a rule of thumb, free-floating schemes have been successful in cities of 500,000 people or more and at least 1,500 people per square km, according to the ICCT. However, station-based car sharing can also be appropriate in the same dense cities when offerings are tailored to different groups. Usually, however, station-based carsharing is recommended in cities with less than 100,000 people, says ICCT (fig. 5, page 14). The study also suggests financial support and aid in charger installation for said less densely populated cities and rural areas.

To conclude, the ICCT stresses that electric carsharing is more complicated than conventional carsharing and calls for new strategies outlined above to reap the benefits fully.

EV subsidies on hold in Sweden & the Netherlands