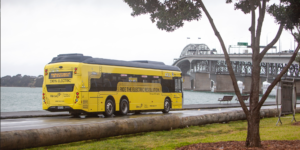 The two bus makers say that the Enviro200EV XLB now arrived in Auckland, is a product of ADL’s expertise in tailoring buses to transport authorities and operators’ requirements along with BYD’s battery technology. In this case, the 12-metre-long vehicle has three axles, which allows it to qualify for reduced Road User Charges in New Zealand thanks to lower axle loads. The new electric bus joining the Auckland Transport fleet has a total passenger capacity of 78  with seating for 36 passengers and two wheelchair spaces. The buses will be evaluated on different services in New Zealand’s largest city in trials supported by energy supplier Mercury.

Mercury’s Energy Futures Manager, Buddhika Rajapakse, remarked that it was exciting to see cleaner, renewable energy powering Auckland Transport’s fleet, adding: “This is a great way to help Aucklanders to kiss oil goodbye. Auckland Transport’s bus fleet accounts for 93,200 tonnes of carbon dioxide equivalent emissions per annum, the largest operational carbon footprint in Auckland’s public transport network.” He pointed out that the transport transition requires more than just making a switch from fossil-fuelled cars to electric cars. “We cannot rely on the electrification of private vehicles alone. We must also shift our mindset towards reducing or avoiding travel, active modes such as walking and cycling, and of course public transport.”

Auckland’s public transport authority has made significant efforts to decarbonise its bus fleet and to ensure that the buses – both battery-electric and fuel cell – are to be made in New Zealand. In 2019, two “extra large” buses – one battery-electric, the other fuel cell – were ordered in 2019. In 2020, the city initiated its Low Emission Bus Roadmap. Later that year, Siemens announced it was going to build chargers for electric buses in New Zealand. Auckland’s first fully electric bus fleet went into operation in November 2020 on Waiheke Island.

ADL’s electric buses for New Zealand are part of the BYD ADL Enviro200EV range that is also in use around Britain and Europe. The electric buses use BYD’s iron phosphate battery, and driveline technology, which ADL said that by November last year had already demonstrated its reliability and efficiency in over 60,000 zero-emission buses worldwide.