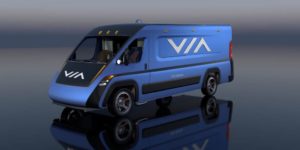 Chinese-US fintech and sustainable transport company Ideanomics has acquired US electric utility vehicle manufacturer Via Motors for $450 million. This is Ideanomics’ fourth acquisition in the last 12 months in the electric mobility sector.

Headquartered in New York with offices in Beijing, Guangzhou, and Qingdao, China, Ideanomics has invested heavily in zero-emission transport recently. The goal is to build vertically integrated offerings for fleet operators and transit agencies transitioning to electric vehicles. The three acquisitions to date are US Hybrid (electric drive components and fuel cells), Solectrac (e-tractors) and Wave (inductive charging systems).

Via Motors is headquartered in Orem, Utah, and designs and plans to manufacture commercial electric vehicles for the global fleet market. CEO Bob Purcell says the company is changing last and mid-mile delivery with “innovative electric commercial vehicles that fleets can afford.” The acquisition of Via Motors, worth the equivalent of 380 million euros, is Ideanomics’ largest acquisition to date.

The deal also includes a potential “earnout” for Via-Motors shareholders, who could receive up to $180 million (152 million euros) depending on deliveries through 2026. Earnout clauses define a portion of the purchase price to be paid at a later date or after certain conditions (in this case, delivery targets) are met. In the case of the Via Motors acquisition, the purchase price could thus still rise to as much as $630 million.

“This acquisition marks a transformational milestone for Ideanomics,” CEO Alfred Poor said in an investor call on the deal. He noted that the acquisition also provides “full OEM manufacturing capabilities,” meaning the company can now manufacture EVs as well as financing them and providing charging solutions. Poor did not provide details on Via’s financial projections or earnout prospects.

Via CEO Purcell welcomed the acquisition saying, “Combining VIA with Ideanomics facilitates significant synergies, while Ideanomics’ financial and personnel resources provide the backing we need to pursue an array of exciting growth prospects we have identified. All of us at VIA Motors are delighted to join the team to usher in the new era of electric commercial vehicles and further the long-term growth strategy at Ideanomics.”

Via Motors’ vehicles are based on a proprietary skateboard platform that the company says is scalable and flexible for Class 2, 3, 4 and 5 vans and trucks suitable for short or medium distances. The trucks’ are made with a modular body approach that enables a capital-light single design for its platforms, drive systems and vehicle models.