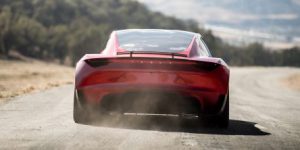 Tesla has announced a new delivery date for the Roadster 2. On Twitter, CEO Elon Musk stated that the electric sports car should be on the market in 2023 – but Musk also immediately added a caveat.

“Assuming 2022 is not mega drama, new Roadster should ship in 2023,” Musk tweeted. With the “mega drama”, the Tesla CEO is likely alluding to the global supply bottlenecks, especially with semiconductors. “2021 has been the year of super crazy supply chain shortages, so it wouldn’t matter if we had 17 new products, as none would ship.,” Musk said.

Tesla had already presented the second generation of the Roadster in 2017. At the event, the Semi electric truck was actually presented – until a prototype of the Roadster drove out of the trailer at the end of the show. At the time, a production start date of 2020 was mentioned – the Semi was to be built in series in 2019.

As we know, that didn’t happen for either model – the Corona crisis intervened, among other things, but also delays with the battery supply. Both the Semi and the Cybertruck and Roadster are probably supposed to use the new 4680 cells. At present, however, Tesla does not have enough of these new cells to fit them into the existing production Model Y – originally, the Model Ys from the Gigafactory in Texas near Austin and the vehicles from the German Gigafactory in Grünheide were to be delivered with these batteries and the structural battery packs. In the meantime, Tesla is working on a “Plan B” here – i.e. presumably with 2170 cells.

Tesla had already confirmed in January 2021 that the production of the Roadster 2 would be postponed to 2022. In the meantime, however, Tesla is probably also more affected by the chip shortage; initially, the Californians got through the crisis much better than other carmakers.

It is well known that if there are further problems or delays, the Roadster will be the first model series to be postponed. Musk had referred to the Roadster several times in the past as a ‘dessert’, which only comes after the main course. So the global ramp-up of Model Y production in several plants, the Cybertruck and Semi have priority. The ‘baby Tesla’ for 25,000 dollars, often already referred to as the Model 2, could also come before the ‘dessert’.

All new Genesis models to go fully electric by 2025