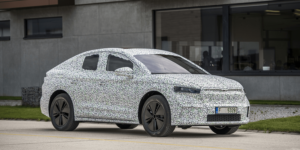 A few months before the sales launch, Skoda has revealed more details about the Enyaq iV Coupé. However, the SUV coupé of the well-known MEB battery-electric car will only be launched in three of the five drive variants of its SUV brother.

With a cW value of 0.247, the coupé is said to be more aerodynamic than the familiar Enyaq – and thus outperform it in terms of range. For the version with the longest range – i.e. the Enyaq Coupé iV 80 – Skoda states a range of “more than 535 kilometres” in the current press release. That would be the minimum, because the SUV version with this drive is given by the configurator as up to 534 kilometres. How big the difference really is will only be revealed by the WLTP homologation on the test bench and, above all, everyday test drives.

When it comes to charging, the Enyaq Coupé iV corresponds to the SUV model: the 58 kWh battery can be charged with up to 120 kW with the current software, while the 77 kWh battery can currently be charged with a maximum of 125 kW – an update has been announced for the autumn, which is rumoured to enable up to 170 kW at corresponding DC charging stations. However, this has not yet been confirmed. For AC charging, an 11 kW on-board charger is standard.

In terms of boot space, the coupé version is not that far away from the SUV model at first glance: instead of 585 litres, Skoda specifies 570 litres here. However, the 585 litres of the Enyaq iV are only measured up to the lower edge of the windows according to the VDA standard – the real difference between SUV and SUV coupé only arises above this with the flat rear window. The coupé will therefore not reach the up to 1,710 litres of the Enyaq iV. The exterior dimensions of the two models differ only minimally, the Coupé is four millimetres longer and one millimetre higher. The announcement makes no mention of a trailer coupling for the Coupé.

With the “elegant design” according to Skoda, the Czech company wants to expand the Enyaq family with a more dynamic model “for lifestyle-oriented customers”. “With our purely electric flagship Skoda Enyaq iV, we have succeeded in getting off to a flying start on the international markets. The vehicle has been extremely well received by our customers, and we already have around 70,000 orders,” says Skoda boss Thomas Schäfer. “We will follow up with the Enyaq Coupé iV at the beginning of 2022: This even more emotionally designed model variant of our e-SUV is a real design highlight and rounds off our model range upwards.” However, Schäfer does not mention sales targets for the SUV coupé or prices.