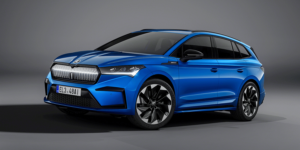 Škoda will launch a coupé variant of the Enyaq iV electric model later this year, the Czech Volkswagen brand has now announced. Škoda is also calling for one of VW’s six battery cell factories to be built in the Czech Republic.

But first to the Enyaq iV Coupé: the manufacturer announced the model during its annual press conference, and in 2020 Škoda could deliver just over one million cars despite the Corona pandemic. Škoda did not provide any more detailed information about the electric SUV Coupé beyond the fact that the model is due to hit the market this year and will be simply called the Enyaq iV Coupé. Even a picture has not yet been released.

“With the launch of the ENYAQ iV, the new-generation FABIA, the coupé version of the ENYAQ iV and the two updated best-selling SUVs KODIAQ and KAROQ, we have a host of new products in the pipeline again this year,” said marketing and sales board member Martin Jahn verbatim.

The company has not officially confirmed this, but it is very likely that the coupé will be built together with the Enyaq iV at Škoda’s headquarters in Mladá Boleslav. It is unclear whether the Czech company will offer the same variety of battery and drive options for the coupé as for the regular Enyaq, or whether the model will only be offered in the more powerful and range-extended variants, given the otherwise usual target group for SUV coupés.

That Škoda is working on such a model is no surprise, not only in view of the closely related VW ID.5 and Audi Q4 Sportback e-tron: shortly after the premiere of the Enyaq in September 2020, prototypes with a flat coupé rear were already spotted.

The company is also pushing for one of Volkswagen’s planned six battery cell factories to be built in the Czech Republic. “We need at least one gigafactory here in the Czech Republic. It is the right place to do it for many reasons. Not least logistically because we are in the heart of Europe, close to many automotive countries around us, so I believe it’s a great location – and there’s lithium in the Czech Republic,” says Škoda CEO Thomas Schäfer. However, Schäfer also cautioned that this would require the support of the state as in Spain.

At last week’s ‘Power Day’, Volkswagen announced its intention to build six battery cell factories with an annual capacity of 40 GWh each by 2030. The first factory will be built by partner Northvolt in Sweden, the second by VW in Salzgitter. Factory number three is to be built in Southern Europe (France, Spain or Portugal were mentioned), the fourth in Eastern Europe. No region has yet been named for the remaining two factories.

The Czech Republic with the Škoda plants would be a possible location for the Eastern European factory, but the VW group already has locations in Hungary (Audi engine plant in Györ) and Poland (including VW Commercial Vehicles in Poznan) where synergies could be achieved at least in logistics. If the announced Eastern European cell factory is not built in the Czech Republic, there are still chances for factories 5 and 6.