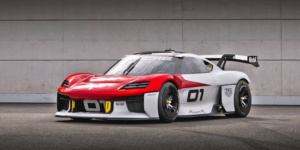 At the IAA Mobility, Porsche presented its vision of purely electric customer motorsport with the Mission R concept. The concept car is intended to be more than just a design study – a rolling chassis is already being tested.

Unlike the usual GT racing cars for customer motorsport, the Mission R presented in Munich is not based on a production model, but was developed from the ground up as an electric racing car. The Mission R – named after the Mission E in reference to the Taycan concept – is powered by two electric motors. The one on the front axle produces up to 320 kW, the one on the rear axle up to 480 kW.

This should result in a system output of 800 kW in the so-called qualifying mode – as the reference to qualifying suggests, however, this output can only be used on a timed lap. Then spurts to 100 km/h in 2.5 seconds and a top speed of more than 300 km/h are possible. In race mode, the drive offers 500 kW.

The battery with cells from the Porsche joint venture Customcells comes to 80 kWh and should – also thanks to an innovative oil direct cooling of the battery cells – enable “sprint races without any loss of power”, as Porsche writes. In the live stream, Porsche CEO Oliver Blume explained that the races should last around 30 minutes. With the 900-volt technology, charging powers of up to 340 kW should be possible. According to Porsche, this means that a 15-minute break in the race is enough to charge from five to 80 per cent – assuming the appropriate infrastructure at the race track.

Porsche says it has also paid attention to sustainability in the bodywork of the study. It is largely made of natural fibre-reinforced plastic (NFK) – primarily flax fibres from agriculture.

“We experience our innovative strength on the race track, demonstrate courage in pursuing new avenues and delight car owners with sporting performance,” says Porsche boss Blume. ” addition to our involvement in the Formula E World Championship, we are now taking the next big step forward in electric mobility. The concept study is our vision of all-electric customer motorsports. The Mission R embodies everything that makes Porsche strong: performance, design and sustainability.”

Customer motorsport is definitely a market for the sports car manufacturer. Since the start of the Porsche Carrera Cup Deutschland 31 years ago, Porsche says it has produced and delivered more than 4,400 units of the Cup cars from Weissach. However, Porsche has not yet announced a concrete application for the Mission R.