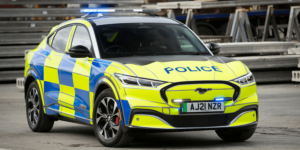 Ford has unveiled a Mustang Mach-E police concept at the Emergency Services Show in Birmingham, following several requests from forces around the country to evaluate the electric SUV. Seven UK forces have either tested the fully electric patrol car or have inquired about the specially-built prototype.

Ford, in its comms, states it built a full ‘blue light’ livery test car following many enquiries from UK police forces which are thought to be looking for green cars than the ICE vehicles that make up most of their current fleets.

On show in Birmingham is the conversion of the Mach-E police concept, which was overseen by Essex-based Ford partner Safeguard SVP. Ford has used the Standard Range AWD version of the SUV but says it plans to offer an Extended Range model with the choice of rear-wheel or all-wheel drive.

At present, the new Mach-E is capable of 0-62mph in 3.7 seconds (GT version) and 111mph, with the US manufacturer hoping it will be a “useful weapon against crime for any police car, while the all-electric Mach-E will offer the forces one of the most economical and environmentally-friendly cars on their fleets.”

Ford was also quick to ensure that the blue lights wouldn’t compromise the concept’s electric range. “The vehicle range is uncompromised as the blue light equipment is drawn from the vehicle’s 12V battery and not the drive battery,” said Terry Adams, Blue Light direct sales manager at Ford of Britain and Ireland. However, he added that the company was also looking into increasing battery capacity in future for further equipment to be fitted.