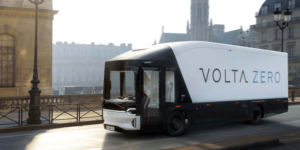 Swedish electric truck start-up Volta Trucks has raised 37 million euros in its Series B funding round. Pre-orders for the Volta Zero now exceed 2,500 vehicles with an order value of more than 600 million euros and have doubled in the last three months.

Since Volta Trucks had not previously communicated prices for the Zero, a price can now be derived from the order value: With a volume of 600 million euros and 2,500 vehicles, each electric truck would consequently have to cost 240,000 euros.

According to Volta Trucks, the most important investor in the Series B financing was the existing investor Luxor Capital. But strategic partners such as the battery supplier Proterra also participated in the financing round. This is Proterra’s first financial investment in Volta.

In addition, the original seed investor Byggmästare Anders J Ahlström from Stockholm has increased its investment in Volta Trucks. The real estate group also participated in the Series A round.

Volta says it will use the money to accelerate the development of its pilot fleets. These vehicles are expected to be used by pilot customers from mid-2022 onwards. “The successful completion of our Series B funding round gives us positive external validation of our journey,” said Essa Al-Saleh, chief executive officer of Volta Trucks.

A few days ago, Volta Trucks selected Steyr Automotive as its contract manufacturer. Steyr will build the vehicles for the pilot fleets in London and Paris before series production is scheduled to start at the end of 2022.

Iveco & Nikola getting closer to truck plant in Germany