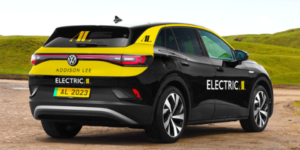 London’s largest taxi and hire car company Addison Lee has announced that it will only use purely electric cars from 2023. Addison Lee already has 650 electric cars in service. From November, 200 VW ID.4s are to be added every month.

The company says in a statement that it will invest 160 million pounds to convert its fleet of more than 4,000 vehicles to electric power. That is the equivalent of just under 187 million euros. The rapid electrification is to succeed thanks to a partnership with Volkswagen for what Liam Griffin, the company’s managing director says is “the largest purchase of electric vehicles by a private hire company in the UK.”

After the changeover, 20,000 journeys a day in London are expected to be emission-free. Griffin says that Addison Lee is aiming for the complete conversion to electric vehicles two years earlier “than any other major provider of private vehicles in London”. With this, the CEO is likely to be alluding to Uber in particular. The US ride-hailing company recently announced its intention to operate all of its vehicles in London fully electrically from 2025.

Addison Lee took over the ComCab taxi platform this year and already has more than 650 emission-free taxis. The further conversion is also to succeed thanks to a 3.5 million pound fund (around four million euros), which is to co-finance charging infrastructure, among other things. Addison Lee says they are is still looking for a charging partner.

“We need to lead the way, but we can’t do it alone,” Griffin concludes. “There is an urgent need for collective action if London is to become one of the greenest taxi and PHV (private hire vehicle, ed.) markets in the world. A key component, he says, will be public-private collaboration between TfL (London’s public transport authority, ed), London boroughs, energy companies, charging station providers and businesses like ours to help build the charging network.” In 2019 the London Mayor, Sadiq Kahn announced an infrastructure plan whereby TfL created a special task force to integrate private sector commitment.

Addison Lee has partnered with JustPark to support its drivers in the transition to EVs by providing them with exclusive access to off-street charging points. This will mean that FleetCharge will ensure drivers who work with Addison Lee who do not have off-street parking available to them will be secured a parking location within a five-minute walk of their home and have a conveniently placed charging unit installed. If Addison Lee drivers already have access to off-street parking, FleetCharge says it will be available to support the installation process at their homes.

The installation of the charging points will be undertaken by Octopus Energy. Drivers who rent a JustPark parking space will be given exclusive use of the charger also provided by Octopus delivering low-cost renewable energy.

Addison Lee’s CEO, Liam Griffin, said: ‘‘Following our pledge to electrify our fleet by 2023, we know how important it is to support our partner drivers with suitable charging solutions for their vehicles. That’s why we have chosen to partner with industry innovator, JustPark, as the first fleet to adopt its FleetCharge product.”