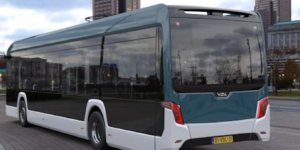 The Finnish bus company Pohjolan Liikenne has ordered 25 electric buses from VDL Bus & Coach. The LE-122 e-buses of the new Citea generation will be put into operation in 2023.

The LE-122 e-buses of the new Citea generation were first presented at the end of May this year. VDL say the electric bus is well suited to both city and regional transport on account of the 490kWh battery pack, 39+4+1 seats, and the 12.2-metre Low Entry.

The 25 new buses will operate in urban transport in the southern Finnish port city of Kotka located in southern Finland, about 130 kilometres from the capital Helsinki. The buses will also be used for intercity transport from Kotka to Hamina, 20 kilometres to the east. These lines are currently being run by diesel buses which will be replaced with the new zero-emission models.

Pohjolan Liikenne is a subsidiary of the Finnish national rail company, VR and provides local and regional transport services, particularly in southern Finland.

For VDL Bus & Coach, this is the first major order for new-generation Citea buses from abroad, after the Dutch transport company Hermes ordered 32 new-generation VDL Citeas of type LF-122, which are scheduled to enter service in the Eindhoven region in the first quarter of next year.