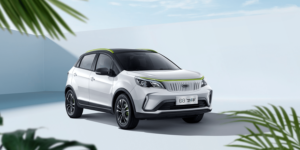 Geely’s electric car subsidiary Geometry presents its most affordable model to date, the EX3. According to its “estimated pre-sale price”, the five-seat compact electric car will cost 59,700 yuan, around 7,900 euros. The EX3 is already available for pre-order in China, and will be introduced in other markets later.

Geometry is currently present in China with two models, the Geometry A and the Geometry C, a sedan and a crossover in almost classic compact car form. These are now joined by the EX3, which Geometry wants to position as “one of the most affordable five-seater electric cars on the Chinese market” and has designed primarily with young buyers in mind. Pre-orders are already possible with a deposit of 300 yuan. Sales will initially be made through Geometry dealers in over 20 cities in China. “In due course”, the EX3 will then also be offered on export markets.

The following is known about the technical data sheet. The Geometry EX3 is 4,005 mm long, 1,760 mm wide and 1,575 mm high – with a wheelbase of 2,480 mm. It produces 70 kW and 180 Nm and offers a range of 322 kilometres with a 37-kW battery. As is usual in China, however, this is the NEDC value. The model can be charged from 0 to 80 % in less than 30 minutes via DC fast charging. Alternatively, it is also suitable for charging from a household plug, Geometry says.

Other features highlighted by Geely include an efficient regenerative braking system and a liquid-cooled battery temperature control system. Also dual airbags, rear sensors and cameras, a tyre pressure monitoring system and ABS + EBD are included. In addition, the model is said to be fitted with “high-strength steel anti-collision bars with a tensile strength of over 590 MPa” as standard at the rear and front.

The interior seats five people comfortably, according to the manufacturer. The two-tone design in black and blue with eye-catching fluorescent accents is intended to address said younger buyer groups. Added to this are “suede-like soft-touch materials used throughout the interior”.

Boot capacity is 500 litres and can be expanded to 1,050 litres with the rear seats folded down. In addition, there is storage space in 26 compartments distributed around the interior.

In addition to the new development of the EX3, Geometry has also been working hard to improve its debut Stromer Geometry A. In April, Geely presented a new version of the BEV at the Auto Shanghai with an increased range of 600 kilometres (according to NEDC). Called the Geometry A Pro, the sedan now uses an NCM523 battery. Previously, CATL batteries with 51.9 and 61.9 kWh (for 410 and 500 NEDC kilometres respectively) were used. The electric motor has an output of 150 kW.

In addition, the brand also announced during the spring fair that the Geometry C will be offered in selected markets outside China later this year. However, the Chinese company has not published any further details yet.