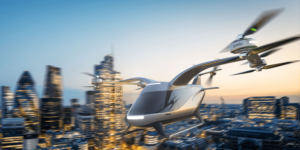 Evolito wants to win the supplier role that Yasa has for the automotive industry with its innovative axial flux motors for the aerospace industry. To do this, Evolito is drawing on Yasa’s intellectual property and exclusive marketing rights for the relevant motor technology. “Yasa’s axial flux motor technology has proven itself in volume production in the automotive industry and has even greater advantages in the aerospace market. Therefore, Evolito is uniquely positioned to drive the commercialisation and adoption of electric flight,” states the newly formed UK company.

According to the company, the axial flux motors and associated power electronics are smaller, lighter and more robust than other competing technologies, opening up a range of new opportunities for vertical take-off and landing electric aircraft, fixed-wing aircraft and distributed electric propulsion applications, such as air taxis.

Evolito, like Yasa, is based in Oxford and counts Waypoint Capital and Oxford Science Enterprises (OSE) among its investors. Yasa was acquired by Mercedes-Benz AG in July. “With this acquisition, Mercedes-Benz gains access to unique technology in the field of axial flux motors and expertise for the development of ultra-high performance axial flux motors,” Daimler commented on the acquisition of the British company in an earlier statement. The background to the deal is that Daimler wants to increase its share of the value chain and insource its drive technologies in order to boost its profitability in the e-mobility sector.

Prior to the Evolito spin-off, Yasa had already been involved in the British ACCEL (short for Accelerating the Electrification of Flight) project in the aviation sector. Together with partners, the company pursued the goal of developing the world’s fastest electric aircraft. Only a few days ago, the initiators of the project announced the maiden flight of the aircraft called Spirit of Innovation. The main project partner, Rolls-Royce, stated that it would use the technology from the ACCEL project in the future and apply it to products for new markets.