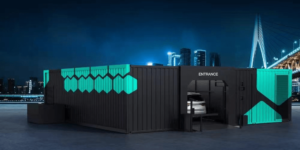 The Chinese car company Geely wants to set up 5,000 battery swapping stations for electric cars in China by 2025. The associated service is called E-Energee.

E-Energee’s first battery-swapping station went live in Chongqing in September 2020. Since then, the service has been expanded to ten Chinese provinces. Geely says it has the goal of bringing 5,000 stations online across China by 2025.

According to Geely,  the E-Energee battery swapping stations enable the electric-car battery to be exchanged for a fully charged one within 59 seconds – without the driver even having to exit the vehicle.

The current E-Energee service is mainly being used by mobility fleets who make use of the additional time on the road afforded by the use of the battery swap stations. Geely says that the battery swapping technology and service has been in the works since 2017 when Geely Technology Group began researching battery swapping technologies. The R&D team grew to over 1,000 people and registered hundreds of patents in the process for both the operating service as well as for the development of battery swap vehicle architectures.

In July last year, Xin Guobin, the vice-minister of the Chinese Ministry of Industry and Information Technology (MIIT), is said to have announced that MIIT will continue to vigorously pursue the construction of infrastructure for charging electric vehicles and replacing batteries. Guobin explicitly encouraged companies to develop and test vehicles with replaceable batteries. In cities such as Beijing and Hainan, the ministry supported corresponding test projects.

In April last year, Geely announced a new low-cost EV called Maple 30x. This, and a van model come from a new electric vehicle brand launched in China named Maple, which is a joint venture between Geely and Kandi’s Fengsheng Automotive Technology Group. Later, in August last year, the company revealed that the Maple van would be called 80V and will also feature replaceable batteries.

Hubject and &Charge join up for better charging