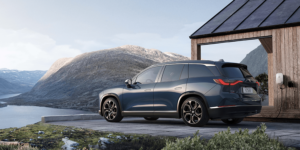 Nio plans to deliver the first ES8s in Norway in September 2021. As the Chinese carmaker has now announced, Norway will also be the first overseas market to offer the company’s complete charging infrastructure – including battery swapping stations.

The timetable for the launch in the first overseas market is tight: Nio wants to go live with its app in Norway in July, test drives with the ES8 electric SUV should be possible from August, and the first binding orders and deliveries will then take place in September: the first transport ship is already scheduled to leave China in June. For those who want to secure one of the first vehicles, reservations will be possible as early as July.

Initially, only the ES8 will be offered, as Marius Hayler, Nio’s General Manager for Norway, stated during the online presentation of the plans. However, this will be an adapted European version of the large electric SUV. This will be offered with the 100 kWh battery, which is supposed to provide a range of 500 kilometres according to the WLTP cycle – at least in the version with 20-inch rims in Eco mode, according to the footnote. Hayler did not name the drive power, but the Europe ES8 is said to be able to accelerate to 100 km/h in 4.9 seconds.

The vehicle is to be sold as a six- or seven-seater, with a maximum load volume of 1,861 litres – Nio does not specify how large the boot is with all six or seven seats. The ES8 is also said to be able to tow up to 1.5 tonnes.

The European version will also have the Nomi smart assistant, and the entire vehicle will run on Nio’s own operating system, NioOS. Thus, the semi-autonomous driving assistant NioPilot will also be offered in Norway.

Before Nio brings further SUV models to Norway (such as the smaller ES6 or its SUV coupé offshoot EC6), the flagship sedan ET7 is to be sold in Norway in 2022. This will enable the next level of autonomous driving thanks to 33 sensors (including Lidar), according to Nio.

Nio did not give any details about the charging performance of the European ES8 at the presentation. However, the announced charging stations should give a hint. A 7-kW charger is to be offered as a wall box for the garage at home, but there was no mention of a three-phase 11-kW charger for other markets at the presentation. The public DC stations that Nio plans to build in Norway will allow charging with up to 180 kW. Halyer did not specify how many of the ‘Supercharger’ charging stations will be built in Norway.

Four battery exchange stations to be introduced in 2021

There is also information about the battery swapping stations. Four of the stations are to be set up in the Oslo area this year, with further stations planned for Bergen, Stavanger, Trondheim and Kristiansand in 2022. The battery exchange stations are to be based on the recently presented second generation but are currently still being adapted for the European market, according to Hayler. In a video clip, however, Nio stated that 312 battery swaps will be possible per day; exactly the value that was mentioned in April at the launch of the second generation.

In addition to the infrastructure, Nio’s sales concept will also be set up in Norway. In Oslo, a Nio House is being built just a few minutes walk from the Royal Palace, with the opening planned for September, it will be the first Nio House outside China. Next year, smaller Nio Spaces will open in Bergen, Stavanger, Trondheim and Kristiansand. Like the Nio House, the Service & Delivery Centre in Oslo is also scheduled to open in September. Together with partners, five more service locations are to be opened in Norway in 2021, and the network is to be expanded in 2022.

However, customers will not have to drive to the workshop themselves. Nio wants to offer a pick-up and drop-off service, and smaller jobs will be done by mobile service vehicles. “A new chapter in electric mobility is beginning in Norway,” says Hayler, who previously worked for Volvo and Jaguar Land Rover. “Today, EV drivers use their cars very much like internal combustion vehicles. I’m convinced that Nio’s Smart EVs can change that, that we use our vehicles more intelligently.”

Customers to advise the carmaker

However, the Norwegian Nio CEO did not want to comment on concrete goals. “We have to be modest because our competitors are strong,” Hayler said. Nio did not yet name prices for the ES8 and ET7.

The fact that the app is to be launched in June before all other activities has a simple reason: in China, the manufacturer sees the app as central for its “community”. As Nio founder Willaim Li explains in a video clip, the app has over 300,000 active users in China – even though the manufacturer has only delivered a total of just over 100,000 vehicles. Through the app, Nio wants to build a group “that starts with smart EVs but goes far beyond that,” Li says.

In Norway, the carmaker also wants to establish the “Nio Norway User Advisory Board”, for which all Norwegians, not just its own customers, should be able to apply. Through the board, the carmaker wants to receive feedback and advice on how the vehicles, but also the services in the Nio Houses and Spaces, can be better adapted to local needs.

The Chinese electric car manufacturer Nio has received European type approval for its ES8 electric SUV. Nio considers the EWVTA certification “an essential foundation” for its entry into Norway and the European market at large.

With the certification, the Nio ES8 is officially approved for mass production and license plate registration in all EU countries.

Under Regulation (EU) 2018/858, the type approval was issued to the NIO ES8 and its systems, components, and separate technical units after corresponding engineering audits and module approvals.

While Nio did not state it specifically, the type approval must be for the planned European version as detailed above. Different from the original model in China, the adapted EU version will carry a 100 kWh battery, claiming a range of 500 kilometres (WLTP).

The Chinese electric car manufacturer Nio is now officially starting sales of its ES8 in Norway and opening the Nio House Oslo, the first in Europe. Initially, the ES8 can be ordered with a 100 kWh battery. Next year, the ES8 will also be available with a 75 kWh battery. With the smaller battery, up to 375 kilometres according to WLTP should be possible.

Nio also announces that it will build 20 battery exchange stations in Norway by the end of 2022. The plan is to set up the stations in the “most important Norwegian cities and along the busiest routes”. In addition, Nio will offer Battery-as-a-Service (BaaS) to its ES8 customers. With a BaaS subscription, six battery swaps per month are included. Initially, Nio buyers will be able to swap an empty 100 kWh battery for a full one at the first station in Lier. From 2022, Nio plans to expand the offer, when customers will also be able to downgrade to a 75-kWh battery. From 2023, a 150-kWh battery is to be introduced.

Nio’s first service and delivery centre is located in Ensjø in Oslo, the capital of Norway. Nio has also signed agreements with authorised service partners in four other major cities: Kristiansand on the south coast of Norway, Stavanger and Bergen on the west coast, and in Trondheim in the centre of the country.

Nio has selected LeasePlan as its leasing partner for the Norwegian market. As part of the partnership, LeasePlan will initially offer the ES8 electric SUV, which can be combined with a Battery-as-a-Service subscription. Whether Leaseplan will also become the leasing partner in other European markets is not clear from the announcement on Norway.

“I’m delighted to announce our exclusive partnership with NIO, which will empower every driver to dump the pump and fight the worst effects climate change,” said Tex Gunning, CEO of LeasePlan Corporation, adding: “NIO’s innovative battery swapping system will eliminate range anxiety, and encourage even more drivers to make the switch to electric.”

With reporting by Sebastian Schaal and Nora Manthey.