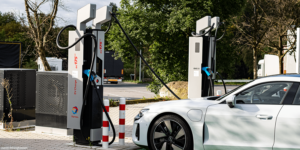 Total is to build a charging network in China. Through a 50:50 joint venture with the state-owned utility China Three Gorges Corporation (CTG), more than 11,000 public charging points with 60 to 120 kW are to be installed in Hubei province by 2025.

The two companies intend to set up co-branded charging hubs with an average of 20 to 50 charging points as well as publicly accessible individual stations, each with between 60 and 120 kW. In addition, the partners also plan to establish a B2B business for the installation of charging stations on private premises. Total says that the electricity for the 11,000 charging points envisaged by 2025 is to “largely come from renewable sources.”

“We share common and important visions with China Three Gorges the ambition to reach carbon neutrality, the undeniable willingness to push for renewable power and the enthusiasm to develop electric mobility,” says Alexis Vovk, President Marketing & Services at Total. “Hubei province is a natural ground to launch this cooperation, as both our companies are established there (…).” He added that the partnership with CTG opens new doors for long-term and expanded cooperation in the field of electric power in China.

Total said it has been present in Wuhan and Hubei province since 1995, notably through its service station network, lubricants business and subsidiary Hutchinson. For the French energy company, the now publicised partnership with CTG is the second charging infrastructure offensive in Asia, following the company’s recent acquisition of the electric car charging network in Singapore from Bolloré Group.

CTG Group chief information officer Jin Heping, meanwhile, stresses that by working with Total, CTG aims to extend its upstream expertise in clean power generation and electricity supply to its downstream retail and mobility services business, while creating a model for technological innovation in charging. “We are looking forward to learn from each other, and to establish a long-term relationship with TotalEnergies in other energy sectors in China and worldwide”

CTG Corporation is the operator of the Three Gorges Dam in China and describes itself as the world’s largest hydropower producer. Over the past five years, the company says it has built hydro, wind and solar power generation capacity of more than 30 GW in China and overseas, particularly in Europe.

Total’s involvement in the e-mobility sector had so far focused mainly on Europe. In June just passed, Total also won a new concession from the city of Amsterdam to expand its public charging network. Under the contract there, Total will add 1,100 new charging stations or 2,200 new charging points to the network. The installation is scheduled to be completed by autumn 2022. Total had already received another concession from the Amsterdam metropolitan region (MRA-Electric) at the beginning of 2020. In the MRA-Electric area, which covers the three provinces of Noord-Holland, Flevoland and Utrecht, the group has been awarded the contract for up to 20,000 new charging points.

In addition, Total is active in the operation of charging infrastructure in major European capitals such as Paris and London. By 2025, the company aims to operate more than 150,000 charging points for electric cars. In Germany, Total focuses on fast charging points at petrol stations and the B2B business with charging points in company car parks.