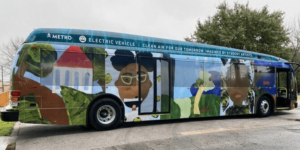 Proterra has announced that Capital Metro in Austin, Texas is purchasing 26 40-foot Proterra ZX5 Max electric transit buses, with an option for another 126 of these buses plus chargers over the next 5 years. The first 26 electric buses should be delivered in 2022.

In the announcement about the new electric bus purchase, it is said that Capital Metro aims to transition its entire fleet of more than 400 transit vehicles with zero-emission vehicles. According to its website, the Austin public transport provider currently has a fleet of 368 MetroBuses, which are presumably fossil-fuelled, since they list their 12 electric buses separately. The fleet also consists of 10 trains, which are diesel-electric, 257 vanpools and 213 paratransit vehicles.

Through Proterra Energy the electric bus maker and battery supplier says it offers “a turn-key approach to delivering the complete energy ecosystem for heavy-duty electric fleets through charging infrastructure design, build, financing, operations, maintenance and energy optimisation.” In June this year, Proterra announced it was going to go public on the stock market.