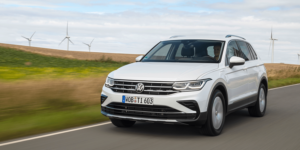 In the course of a presentation of its current plug-in hybrid models, Volkswagen has given an outlook on its upcoming PHEV strategy. A new generation of plug-in hybrid drives is expected to be used from 2023.

The plan is for the 1.4 TSI combustion engine used so far to be replaced by the 1.5 TSI. Secondly, the battery capacity and thus the electric range are to increase significantly – the latter to around 100 kilometres. In addition, Volkswagen’s PHEVs will in future have a fast-charging option with a CCS connection, enabling significantly faster charging processes than with the existing single-phase onboard chargers with only 3.6 kW charging power.

Currently, Volkswagen’s MQB models house 1.4 TSI four-cylinder engines producing between 110 and 115 kW, combined with an electric motor producing up to 85 kW and a 13 kWh battery. In addition to the new combustion engine generation, a battery of the same size with doubled energy content is to find its way into the Group’s new PHEVs. This is to be achieved through a new packaging method and improvements at cell level. The electric drive system is to remain almost unchanged in the housing of the six-speed dual-clutch transmission.

Media reports indicate that the AC onboard charger could also be upgraded. From the 3.6 kW single-phase mentioned at the beginning to 11 kW three-phase, although this has not been confirmed.

With these announcements, the Wolfsburg-based company is underlining its intention to continue to rely on plug-in hybrids for quite some time on the road to the BEV future. As is well known, the VW brand wants to exit the business with combustion engines in Europe by 2035 at the latest, Audi by 2033.

Incidentally, the extension of the electric range of PHEVs is also important in terms of subsidy policy. Stricter requirements for PHEVs are likely to be introduced in Volkswagen’s native Germany for the innovation premium in the future. In advanced drafts of the subsidy guidelines, the CO2 emission limits for PHEVs, which have been decisive up to now, will be replaced by specifications on the electric-range. Accordingly, from 1 October 2022, only plug-in hybrids that offer a minimum electric range of 60 kilometres will be eligible for funding. From 1 January 2024, the bar is to be raised to 80 kilometres.