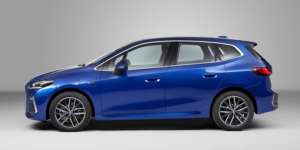 BMW has presented the second generation of the 2 Series Active Tourer. It will be launched on the market in February 2022, initially as a combustion engine, and in summer 2022 the range will be expanded to include two plug-in hybrid variants.

It was not certain for a long time that the 2 Series Active Tourer would get a successor. Many reports said that the BMW van would be discontinued. Since the Munich-based company has sold 420,000 units of the first generation since 2014, there will be a new edition after all – but only for the smaller 2 Series Active Tourer, the larger 2 Series Gran Tourer will indeed be discontinued.

To compensate for the discontinuation of the Gran Tourer, the Active Tourer will be slightly longer. With a future length of 4.39 metres, however, it remains in the compact segment. Depending on the engine (and the space required for the hybridisation), the boot capacity is between 406 and 470 litres – with the rear seat backrests folded down, the maximum is 1,455 litres, in the plug-in hybrid 1,370 litres. In the predecessor it was 400 to 1,350 litres. The rear seat in the 2 Series Active Tourer can be moved by up to 13 centimetres.

The two plug-in hybrids, which are to follow a few months after the market launch, still use the familiar transaxle layout, but are technically fundamentally revised. The BMW 225e xDrive now has a system output of 180 kW instead of the previous 165 kW. The three-cylinder petrol engine continues to produce 100 kW, but the electric motor installed in the rear increases its rated output from 65 to 80 kW.

The 230e xDrive with a system output of 240 kW is new – this version will take over at the top model of the series. Here, the combustion engine produces 110 kW, the electric motor 130 kW. Both PHEV versions use a flat battery placed in the underbody around the exhaust tract. The energy content is said to be 16.3 kWh gross, of which 14.9 kWh should be usable – which should allow an e-range of up to 80 kilometres according to preliminary WLTP values. BMW gives both powertrains a WLTP consumption of 1.1-1.4 litres and 17.9-20.0 kWh/100km respectively.

The battery will continue to be charged exclusively with alternating current, a DC charging option is not planned. The charging power is up to 7.4 kW (instead of the previous 3.7 kW), which should allow a complete charging process from 0 to 100 percent in less than 2:30 hours. However, BMW does not specify in the press release whether the 7.4 kW are charged in single-phase or two-phase mode – if the shifted load regulation applies to single-phase charging, the charging power decreases and the charging time increases.

Not only the powertrains, but also the interior design of the new 2 Series Active Tourer was inspired by the large iX. Although there is a continuous centre console, the arrangement of the upper, floating element with the gear selector lever is strongly reminiscent of the large flagship SUV. The curved display and the BMW OS 8 operating system (and the associated lack of physical switches for the air conditioning) are also familiar in their basic features from the iX. For features such as the head-up display, however, the 2 Series Active Tourer has to make do with the simpler and cheaper solution with a small auxiliary glass panel.

On the outside, the van follows the trend towards a significantly larger radiator grille, but is still recognisable as the successor to the previous model series. At the rear, the design has been developed only minimally. Both PHEV versions can be ordered with a trailer coupling, the maximum towing capacity (braked) is 1,400 kilograms.

BMW has not yet announced prices for the 225e xDrive and the 230e xDrive.