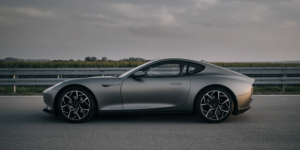 Swiss electric car start-up Piëch Automotive has begun testing its Piëch GT electric sports car. The GT is based on the Mark Zero, which was presented as a study at the 2019 Geneva Motor Show.

The Piëch GT is scheduled to be launched in mid-2024 as the first vehicle in a product family of three variants. The visual changes to the GT now presented at the Piëch Development Centre in Memmingen are minor compared to the Mark Zero concept. The road-ready prototype has not only adopted the proportions, but also numerous design details at the front. There have been changes at the rear, however, and the LED tail lights are now C-shaped and better integrated into the lines.

The GT is powered by three synchronous motors (one at the front and two at the rear axle), which are said to have a system output of 450 kW. The 1.8-tonne sports car should thus be able to accelerate to 100 km/h in less than three seconds. The WLTP range is supposed to be 500 kilometres.

While three electric motors and 450 kW are certainly no groundbreaking novelty, the information on the battery may be understood as such: Piëch is still sticking to the goal announced in 2019 of being able to charge the battery to 80 per cent in only about five minutes. This is already said to be possible at a fast-charging station developed together with TGOOD, while charging to 80 per cent at an Ionity charging station is said to take around eight minutes.

The special feature, which had previously been announced, is that the battery in the Piëch GT is not liquid-cooled. This is made possible by pouch cells from a Chinese manufacturer, the Desten Group. The cell is said to have an extremely low internal resistance, which means that little heat is generated during the charging process – and consequently little heat has to be dissipated. Allegedly, the cell only heats up by 12 degrees when it is loaded with 190 amps. According to the cell manufacturer, 3,000 cycles are possible.

Tests will now show whether this battery concept works not only at the cell level, but also in the battery pack and in the vehicle itself. Incidentally, Piëch is not only hoping for shorter charging times from the battery technology, but also for better handling of his sports car: dispensing with the water cooling system should save a total of 200 kilograms in weight.

“The future clearly belongs to the pouch cells we use – both in terms of weight and fast-charging capability,” says head of development Klaus Schmidt. “We are particularly pleased that the battery developed especially for Piëch can also be employed for use in series production.”

There are also changes in the management team: ex-Porsche and VW boss Matthias Müller is leaving the supervisory board. Andreas Henke is also leaving the board – but Henke will remain on board as an advisor. On the board, Timo Kauer has been appointed as chief financial officer. “Together with the management team, we have focused on various core aspects of the company’s development as well as bringing in international thought leaders and advisors such as STJ Advisors, in addition to the major bank UBS, in order to optimally position ourselves for Series B fundraising,” says the new CFO.