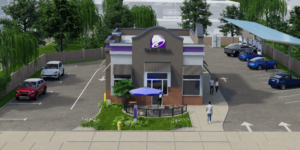 The Californian partnership is expected to expand in other areas and is funded by the California Energy Commission. This includes funding from the Self-Generation Incentive Program (SGIP).

“Our goal is to replace the refuelling experience that Americans know with a charging experience that is fast, convenient, and inviting,” said Tosh Dutt, CEO of ChargeNet. “Our first installation is just the beginning of realising that goal, and will be the first of many as we look to expand charging opportunities throughout the Bay Area and other parts of the country in the hopes of increasing adoption of EVs, especially in lower-income areas.”

Tritium says that the partners have already begun installing 75kW Tritium RTM fast chargers at the restaurant chain. These should be operational by the end of October. The charging points can provide up to 46 miles of range in 10 minutes and accept payment through ChargeNet’s mobile app and an integrated credit card reader.

“We’re always looking for opportunities to do things that haven’t been done before and especially those that create a “win-win” for our customers, the community and our business,” said SG Ellison, President of Diversified Restaurant Group, who operates nearly 250 Taco Bell and Arby’s in five states and is rapidly growing. “Tosh and his team have been great partners and we’re looking forward to providing our customers with the opportunity to charge their vehicles on Tritium’s market-leading technology.”

Earlier this month over in Europe, Tritium provide fast-chargers for Allego, which has expanded its partnership with the Van der Valk hotel chain and will install 120 new fast chargers at more than 50 hotels in Belgium and the Netherlands from the end of this year.

Oceans away in Southeast Asia, Tritium is opening a new regional office that aims to cater to the increase in interest in EVs in Asia-Pacific and the Middle East. This should allow the company to have a local presence in the region and align more closely with its customers in Asia.

“The region has been very proactive in incentivising uptake of electric vehicles,” said Jane Hunter, CEO, Tritium. Jane Hunter and Tritium are both Australian, neighbours to Southeast Asia. Hunter points out that Singapore has recently launched an EV Early Adoption Incentive and an enhanced Vehicular Emissions Scheme to further close the cost gap between EVs and internal combustion engine vehicles. Not far away, Thailand has announced that EVs will contribute to at least 30 per cent of total domestic vehicle production by 2030. “… And the country will be equipped with 12,000 public fast-charging stations by that time,” Hunter extrapolates. She says that while these are just two examples of a region-wide push to transition to electric vehicles, “…we’re seeing an increased interest in the installation of publicly-available charging infrastructure as a result.”

To head operations in the region, Tritium has appointed Ravi Vaidya who was recently appointed to the role of Vice President of Sales, APAC and the Middle East. “Singapore is the gateway to Asia, and as we look to break into those markets and assist them in deploying fast-charging infrastructure, Singapore makes sense as a regional foothold for us,” said Vaidya.