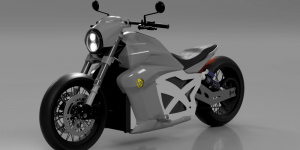 The increased range is made possible by a new battery. Instead of 18650 round cells, Evoke now uses prismatic battery cells with NMC chemistry for the Urban series, as they are also used in the much more powerful 6061 motorbike. However, while the performance motorbike has a 24.8 kWh battery (and a city range of 470 kilometres), the new power storage unit of the Urban models is 10.0 kWh. The Urban models can be charged to 80 per cent in 90 minutes, the onboard charger has a capacity of 3.3 kW.

Evoke had already presented the first variants of the Urban series in 2017. At that time, the battery capacity was still 7.8 kWh.

“From existing customer feedback, we’ve listened to the request for more range, and were worked hard to deliver on that promise,” says Sebastian Chrobok, COO of Evoke Motorcycles.