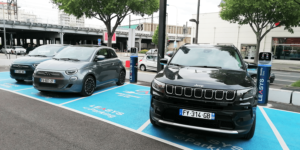 In Europe, the Stellantis subsidiary Leasys has presented its electric mobility strategy. Here, the company says the vehicle fleet for short-term rentals is to be completely converted to electric vehicles by the end of 2027 but has not said how large the share of electric vehicles in the total fleet will be.

Leasys is a wholly-owned subsidiary of the FCA Bank Group founded in 2001, which in turn is a 50:50 joint venture of Stellantis and the major French bank Crédit Agricole. Based in Italy, Leasys says it offers individuals, sole traders and companies of all sizes a complete and innovative system of mobility services: from short, medium and long term rentals. In its home market of Italy, Leasys has now created more than 400 so-called mobility bases in cities, as well as at airports and railway stations.

Part of the fleet, specifically meaning those for short-term rentals, is to be 75 per cent electric by 2024, and by the end of 2027 only electric vehicles are to be in the fleet for short-term rentals. While Leasys says that its total fleet of long, medium and short term rental vehicles exceeds 500,000 vehicles, it does not state how large the fleet for short term rentals is. Given that the company describes itself as “the leading long-term rental company in Italy and an important player at European level”, the share would appear to be the more minor portion.

Leasys also indirectly allows the timetable for the conversion of the short-term rental fleet to be dictated by the expansion of the public fast-charging infrastructure. The company assumes that within three years, the 1,000 fast-charging points currently existing in Europe will triple and a total of more than 3,000 charging stations will then be available in the 12 countries in which Leasys operates. The 12 countries named are Austria, Belgium, Denmark, France, Germany, Greece, Italy, the Netherlands, Poland, Portugal, the UK and Spain.

In its strategy, Leasys has not given any concrete targets for the other areas of the fleet, but electrification is to progress here as well. In Germany, for example, Leasys says it will be supporting the introduction of zero-emission vehicles without ownership burden with various mobility solutions. It also plans to introduce more products here in Germany that are already available in other countries.

To finance its plans, Leasys placed a “green bond” in July that matures in July 2024. The company says that these proceeds amount to 2.3 billion euros from over 129 investors. This financing will be used to expand the fleet of low-emission vehicles and the network of fast-charging stations.

Just over a month ago, the Leasys’ parent Stellantis Group gave new details on its electrification strategy at the presentation of its business figures for the first half of the year.