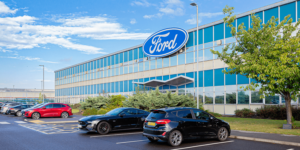 According to Ford, the company will invest the equivalent of 273 million euros in the conversion of the transmission plant in Halewood. According to Ford, the decision in favour of Halewood was made possible by subsidies from the British government. However, Ford did not specify the exact amount of the subsidy. In his statement, Ford’s European boss Stuart Rowley thanked the UK government for its support.

The decision between Halewood and Cologne for component production had already been expected in the past weeks. Already in the run-up, the prospect of government subsidies had been cited as arguments in favour of Halewood – the government was also able to keep Stellantis and Nissan in the country in this way.

The connection to the large assembly plant would have been an argument in favour of Cologne. The forthcoming electric Ford, based on Volkswagen’s MEB, will be built on the Rhine. The Ford Electrification Centre is being built in Cologne for the as yet unnamed model; the conversion work has been underway since August.

According to the announcement, the “power units”, i.e. the drive units consisting of an electric motor and a single-speed gearbox, will be produced in Halewood. Since Ford does not build any vehicles in the UK, the entire production is exported from Halewood. It is not yet known whether the electric drives will be installed in Ford’s MEB model or whether VW will supply the electric drive systems here. Since Ford also states that the power units from Halewood are also suitable for commercial vehicles, they could initially be installed at Ford Otosan in Turkey. Among other things, the electric Transit is built there.

According to Ford, the transmission plant in Halewood currently employs 710 people. Ford did not say how many of these jobs would be retained after the switch to EV component production. Automobilwoche” reports that “according to reports” there will still be around 500 jobs.

In the run-up to the location decision, Benjamin Gruschka, the designated new Ford works council head in Cologne, had announced: “From an industrial logic point of view, the component plant should have been located in Cologne. This is where we are building Ford’s first electric car in Europe, this is where Marelli has set up its electric component production, and this is where we have a large development centre.” For him, the decision in favour of Halewood was a mistake.

While the Cologne location is considered secure in view of the points listed by Gruschka, Halewood has so far mainly been attached to components for the Fiesta. However, the production of the Fiesta will end in 2024/2025, which means that the transmission plant also faces an uncertain future. Now, electric vehicle components are to be built in Merseyside near Liverpool from 2024.