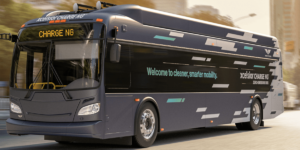 New Flyer has received an order for up to 150 battery-electric buses through the Niagara Frontier Transportation Authority of Buffalo, New York (NFTA-Metro). To start with, the NFI subsidiary will deliver ten e-buses of type Xcelsior Charge.

However, the contract with NFTA-Metro covers five years, including options to purchase up to 140 additional buses. If fulfilled, almost a third of the company’s fleet could then be electric. NFTA-Metro services cover Erie and Niagara Counties in New York State utilising a fleet of 323 buses, powered with diesel, hybrid, and compressed natural gas.

The e-buses now on order with New Flyer mark the transit agency’s first purchase of the kind. “We are excited to provide these ten NFI buses to NFTA-Metro as the transit agency takes its first step towards electrifying its fleet,” said Paul Soubry, President and Chief Executive Officer, NFI. New Flyer is an NFI subsidiary.