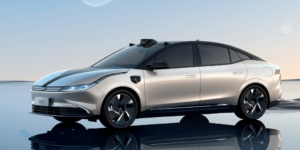 The Chinese electric car start-up WM Motor has presented its first sedan called M7. It is to offer an NEDC range of over 700 kilometres and go into series production in 2022. Among other things, the model is to stand out with technology for autonomous driving and a correspondingly high computing power.

WM Motor plans to launch the new model as a mid-sized coupé with a length of 4,930 mm and a wheelbase of 2,918 mm. At the moment, the start-up is providing as little data on the electric drive and charging power of the M7 as it is on the price. Instead, the presentation focused on the intelligent capabilities of the vehicle. A trend that could already be observed at the most recent presentations of electric Chinese limousines such as the ET7 by Nio or the P7 by Xpeng.

Specifically, the M7 will have up to 32 sensors, including three lidars, five millimetre-wave radars, twelve ultrasonic radars, seven 8-megapixel cameras, four surround-view cameras and an independent high-precision positioning module. The vast amounts of information from this hardware are processed in four chips from Nvidia (“VIDIA DRIV Orin-X”), which are said to have a combined computing power of 1,016 TOPS (“Tera Operations Per Second”).

The equipment with three lidar systems – a kind of three-dimensional laser scanning – has an impact on the appearance of the e-limousine. Three humps can be seen on the roof – a more pronounced one in the middle and two smaller ones on the left and right – each housing a lidar system. Together they are said to cover a horizontal detection range of 330 degrees. WM Motor emphasises that the sensor hardware in its entirety is capable of realising Level 5 autonomous driving in the future. According to the internationally applied scale, 5 is the highest level at which autonomous driving becomes possible in its completed form, i.e. entirely without the intervention of passengers.

According to CFO John Bi, this means WM Motor has already surpassed its full-year 2020 deliveries in September – which were 22,495 vehicles, as reported. “With the entire industry facing shortages of chips and key components since the beginning of the year, we have been able to secure our supply chain and continue to deliver vehicles by relying on the support of our core management team,” Bi said earlier this month at the announcement of a new funding round. “Despite the challenges, we have successfully delivered a positive cash gross profit. Looking ahead, we will continue to expand our distribution network, improve operational efficiency and strengthen customer loyalty, laying a solid foundation to achieve an ambitious target in 2022.”

Currently, WM Motor only offers its vehicles in China. However, a cooperation agreement signed in January 2021 with Italy’s EMP Enel X includes expansion into markets such as Europe, Southeast Asia, the Middle East and South America.