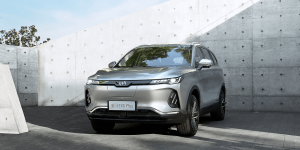 Enel X has signed a strategic agreement with Chinese electric car manufacturer WM Motor to launch collaborations in a number of different fields in electric mobility. The target markets that the duo will jointly target are Europe, China, Southeast Asia, the Middle East and South America.

Enel X will first and foremost support WM Motor in the export of its electric cars – and it will do so by organising the utility’s after-sales service, providing smart chargers with applicable charging standards, guidelines and regulations to WM Motor vehicles, and “improving the charging experience.” The two companies also plan to explore the use of V2G technology in Europe.

While target markets have been defined as Europe, China, Southeast Asia, the Middle East and South America, the first project is initially scheduled to launch in China in the first quarter of 2021. It was only in November that Enel X announced its expansion into China. As a first step, the charging infrastructure specialist opened an office in Shanghai. The company’s goal is to establish its own charging infrastructure products and services throughout the country from Shanghai and, against this backdrop, to seek numerous cooperative ventures.

With WM Motor, the first partnership is now public. “This partnership is yet another confirmation for Enel X’s transition towards a fully sustainable business model,” expressed Francesco Venturini, CEO of Enel X. “The cooperation between the two companies in charging equipment, software and hardware, V2G and other aspects is a powerful alliance, which will accelerate the e-Mobility revolution.” The Rome-based Enel subsidiary says it has established a network of 170,000 public and private charging points worldwide. Recently, Enel X signed several roaming agreements. To date, the Italian company’s main markets are Europe and Latin America. Just a few weeks ago, the company inaugurated the first charging corridor in Central and South America. It includes 220 JuiceBox charging points in eleven countries.

WM Motor, meanwhile, is among the most successful emerging electric car startups in China. In 2020, the company sold a total of 22,495 electric vehicles, a year-on-year growth of 33 per cent. Sales reached a new high of 8,609 units in the fourth quarter of last year. The startup’s debut model, the WM EX5, has now sold 40,000 units since its 2018 launch. In the still-young year, WM Motor is aiming for the market launch of what is now its third production model. This will be a fully electric SUV equipped, among other things, with a cloud-based parking system developed by Baidu.