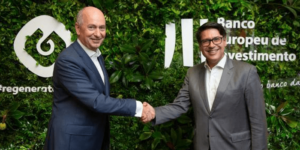 The European Investment Bank (EIB) is providing €41.5 million to Portuguese energy company Galp to support the roll-out of a charging network in Spain and Portugal. The project envisages the introduction of 5,500 charging points by 2025.

Galp plans for 55 per cent of the charging stations to be installed in less developed regions and in so-called cohesion regions on the Iberian Peninsula. In total, the company wants to set up as many as 10,000 charging points by 2025 – another 5,000 outside the EIB-financed project.

The €41.5 million loan is just one of three granted by the EIB to the company. Their total value amounts to 406.5 million euros. The other two loans will be used to finance photovoltaic plants – Galp’s core business. The company, which employs 6,360 people and is headquartered in Lisbon, has committed to invest half of its net investment between 2021 and 2025 in projects related to the transition to a low-carbon energy model, including 30 per cent in renewable energy and five per cent in new businesses.

“Galp’s commitment to become a carbon neutral company pushes us to be bold in the actions we take today while making sure we thrive through the energy transition,” expresses Andy Brown, CEO of Galp. “Our plan to reshape our portfolio is already underway, with Galp accelerating the integration of low-to-no carbon energy solutions in our businesses. The support from EIB is key to help us increase the pace of such projects’ development.”

The EU bank is committed to “mobilising €1 trillion of investment for climate action and environmental sustainability in the crucial decade to 2030”, in line with the European Union’s climate change targets. To this end, the Bank aims to gradually increase the share of financing it provides for these goals to 50 per cent by 2025.

For the decarbonisation of the transport sector, the EIB has an instrument called CTF (Cleaner Transport Facility). In addition, there is CEF (Connecting Europe Facility), a tool to promote growth, employment and competitiveness through targeted infrastructure investments at European level, and CEF DI (CEF Debt Instrument), a further specialised offshoot that is mainly used in the transport and energy sectors. The latter is used to meet specific market needs for which there is insufficient private funding. CEF and CEF-DI grants can be combined as needed to support projects.

Tesla opens charging for third parties in the Netherlands