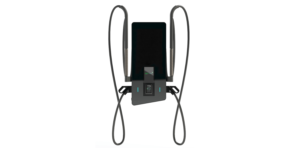 The Italian charging infrastructure manufacturer Alpitronic based in South Tyrol has introduced a new DC charging solution called HYC50. The company says that this is the first wall-mountable 50 kW charger on the market.

While the HYC50 uses the Hypercharger brand name of the familiar HPC columns, it is a new development that deviates from Alpitronic‘s usual design. Unlike current 50 kW charging columns, it can be wall-mounted both indoors and outdoors (protection class IP 54) as well as being mounted free-standing on a pillar.

With the 50 kW charger and the option of wall mounting, Alpitronic is primarily targeting the semi-public sector with locations such as underground car parks, multi-storey car parks or other semi-public car parks. The advantage is that these locations can be equipped with DC chargers without having to build new foundations everywhere, which of course makes installation cheaper.

The HYC50 has two DC connections – CCS1 and CCS2, CHAdeMO and the Chinese GBT standard are all possible. This means that one vehicle can be charged with 50 kW or two with 25 kW each. Alpitronic specifies a continuous charging current of 150 amps (or 2x 75A) and an efficiency of over 97 per cent. A small restriction on the current is that with CHAdeMO, a maximum of 125A is possible.

Two other features stand out: The HYC50 is said to have an “ultra-low noise level”, with less than 50 dBA mentioned in the preliminary product data-sheet. With its quiet operation, the HYC50 should therefore be able to operate in or near residential areas. The low operating noise is also a potential advantage in office locations.

In addition, the HYC50 is “V2G ready”. In principle, this enables Vehicle2Grid applications, although a concrete V2G application has not yet been announced – which is probably simply due to the lack of suitably-equipped vehicles.

On the vehicle side, the HYC50 can cover operating voltages between 50 and 1,000 volts. On the mains side, the unit can handle between 323 and 552 volts and a maximum of 92 amps. The weight is said to be less than 100 kilograms.

The HYC50 is scheduled for market launch in the second quarter of 2022. Alpitronic has not yet published prices on its homepage.