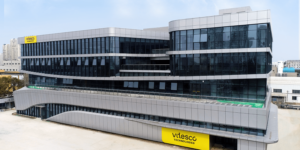 Vitesco Technologies has commissioned a new research and development centre in Tianjin, China. The focus of the new facility is on the development and testing of electrified drive systems – especially for the Asia-Pacific region.

The research and development centre is located at Vitesco’s Tianjin production site, which has been there for 26 years. As is well known, Vitesco Technologies is the former powertrain division of Continental AG, which has been independent since mid-September. Since 2019, the plant in China has been producing fully integrated electric axle drives for customers such as PSA (now Stellantis) or Hyundai. According to the company, the R&D centre will “work closely with local production to optimise resources, increase efficiency and ensure customer satisfaction with high quality”. Initial R&D projects for local OEMs are said to be underway.

From Tianjin, located in north-eastern China not far from Beijing, Vitesco intends to increasingly serve the Asia-Pacific region with hybrid and electrified drive technologies in the future. “Tianjin is one of our most important locations in China, the world’s largest automotive market. With this new research and development center, we are expanding our capacities precisely where we expect the greatest growth in e-mobility,” expresses Andreas Wolf, CEO of Vitesco Technologies.

Vitesco plans to develop battery, motor and electronic control systems for battery-electric, full hybrid and 48 V mild hybrid vehicles in Tianjin. The portfolio is to include high-voltage drive systems, high-voltage control systems, battery management systems, electrified 48-V drive systems and 48-V battery systems. In addition, the R&D centre has a laboratory for testing and validation. Basically, the facility has a gross floor area of 9,000 square metres and space for about 500 employees, the Regensburg-based company says. For recruitment and training, Vitesco is working with the administration of the Tianjin Economic-Technological Development Area and various local universities.

“Our new R&D center will be an important hub for us in the Asia-Pacific region,” explains Changsong Yu, General Manager of the Electrification Technology Business Unit in Asia at Vitesco. “We are unlocking great growth potential for the electrification business across the region and driving the transformation towards e-mobility with local resources in terms of research, development, production and marketing.”

Only recently, Vitesco Technologies had made public that it was preparing to start production of 800-volt electric motor technology in Tianjin in 2023. The motor fits in with the recently announced new generation of the EMR4 electric axle drive, which is to be 25 per cent lighter with the same power. The stator and rotor are to be part of the electric powertrain platform of an unnamed “leading Chinese manufacturer”.

“The Chinese market is not only of paramount importance on the global scale. It is also a competitive market that welcomes and appreciates innovation and premium quality,” Changsong Yu said in September. “The 800V technology significantly enhances our competitiveness in the electrification market position in China. Our pioneering technology fulfills our mission of powering clean mobility.”

Vitesco Technologies is already mass-producing axle drives with its EMR3 platform. The additional 800 V motor technology will complement the EMR4 platform portfolio. Vitesco Technologies will produce the “active parts” on a new line at its Tianjin site. The preceding development of the 8-layer hairpin stator was “an international project”.

Aiways is coming to Switzerland in 2022