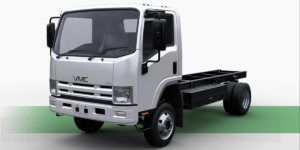 Canadian commercial vehicle manufacturer Vicinity Motor announces that it has received a letter of intent from Pioneer Auto Group, a retail automotive dealer in British Columbia, for 100 electric trucks worth about CAD 14 million (€9.7Mn/$11.1).

Pioneer is a Canadian dealership group with 17 locations located chiefly throughout British Columbia and retails over 6,000 vehicles per year. They expect Vicinity, also based in BC, to deliver the 100 Class 3 Trucks specified in the LOI in 2022, subject to the execution of a dealer agreement, with first orders starting in Q1.

The Vicinity 1200 is a medium-duty electric truck. William Trainer, Founder and CEO of Vicinity Motor, praises “a 6,000-pound load capacity, 150-mile estimated range and a popular cab-over design – all at an attractive price.” The spec sheet further reveals a 150 kWh battery, a top speed of 65 mph and an 8 kW onboard charger.

While not explicitly stated, an announcement in October had revealed Electrovaya as Vicinity’s battery supplier, making NMC chemistry the most likely.

Electrovaya, however, is not Vicinity Motor’s exclusive battery supplier: in June, the Canadian company had ordered electric bus batteries from the German SME Lion Smart – a follow-up order after an initial order in 2020.

Incidentally, Vicinity Motor has only borne this name since this spring. Previously, the Canadian manufacturer was active under the name Grande West Transportation Group.

It also claims a continent-wide dealer network and close relationships with world-class manufacturing partners to supply its flagship electric, CNG and clean-diesel Vicinity buses. Apart from the VMC 1200 electric truck, there is also the VMC Optimal-EV shuttle bus. In addition, the Company sells its proprietary electric chassis alongside J.B. Poindexter subsidiary EAVX, their partner, for retrofitting delivery vehicles with electric drives.

Vicinity Motor has secured a CAD $14 million order from Pioneer Auto Group, a retail automotive dealer in British Columbia, for 100 VMC 1200 Class 3 electric trucks. The VMC 1200 trucks should start arriving at Pioneer in the second quarter of 2022.