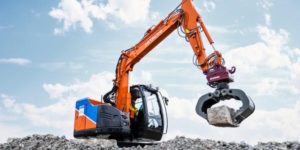 In Germany, the battery maker Akasol has concluded a framework agreement with construction vehicle maker KTEG GmbH for the supply of the AKASystem OEM PRC battery system. KTEG will use it to equip over one hundred small excavators of the type KTEG ZE85. The framework agreement is valid up to and including 2023.

The battery system should allow a runtime of about six to seven hours in operation – and about four hours under “continuous extreme load”. If the battery is empty, it can be quickly charged via a CCS2 connection.

The battery systems are manufactured at the Akasol plant in Langen, Germany, and are part of the AKASystem OEM PRC. KTEG installs the battery systems in the excavator’s superstructure. The series model with an electric drive now on display already has several years of development behind it: in 2018, the two companies presented the first prototype of a ZE85 with Akasol batteries.

“With the concluded framework agreement, we are expanding our successful cooperation with one of the largest and most successful special construction machinery manufacturers in Germany and proving once again how variable and reliable our lithium-ion battery systems can be used” says Damian Nungesser, Head of Sales Off-Highway at Akasol.

As technical features, Akasol describes the high energy density as having a good charging and discharging performance at the same time. The company says that especially the latter is “elementary” for the construction sector when excavators have to be charged quickly during short breaks.

Gillig to use Akasol batteries for electric buses