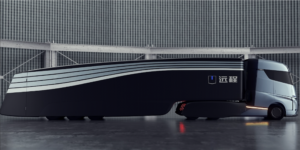 The Geely subsidiary Farizon Auto has just presented an electric semi-trailer truck called Homtruck with an architecture that can carry different zero-emission powertrain options. Production start and first deliveries are planned for early 2024.

The Homtruck architecture can accommodate the powertrain options of a range extender, methanol fuel cell hybrid and a purely electric version with a battery-swapping option. Both the fuel cell and battery swap options offer faster tanking, the company says the latter should only a matter of minutes.

The announcement that a battery replacement option will also be introduced for the BEV version is not surprising in light of recent developments in China: At the end of October, the Chinese Ministry of Industry and Information Technology (MIIT) announced the launch of a government battery replacement pilot programme for electric vehicles – also for trucks.

When the Homtruck rolls out in 2024, Geely’s commercial vehicle group, Farizon Auto has its eye on international markets. The division’s CEO Mike Fan told CNBC: “This product is designed and developed facing the global market,” adding that the company would target Europe, Korea, Japan and North America, with the new vehicle.

As shown in the video link in the Twitter announcement below, the vehicle will already be able to operate some partially autonomous driverless features according to Level 4. For this purpose, a lidar, millimetre-wave radar, ultrasonic sensors as well as 5G and V2X modules are to be installed as standard equipment. Fan said that Geely plans to introduce autonomous driving in three phases. By 2023, the company hopes to have some partial driverless features with more advanced systems in 2026. Geely plans to achieve full autonomy in 2030.

“I’m sure regulations and standards of autonomous driving are in the process of formation,” Fan said.

The name and concept of the truck is based on the idea of a driver’s home-away-from-home in the truck’s spacious cabin which will have its own toilet, shower, single bed, refrigerator, tea maker, kitchen, and even a small washing machine.

Besides the truck’s autonomous capacities, it is well-equipped with quite a few tech perks. Among other more usual features, for longer journeys, the trucks will be able to communicate with each other in a drive train so that they can maintain a safe speed and distance. The truck can also connect to the logistics network’s big data platforms so that drivers can access the most optimal orders in real-time as well as being able to check operating costs along routes.

Geely has really hit the market at a good time with this truck as governments all over the world are trying to decarbonise their transport sectors and long-haul, heavy-duty trucks pose a particular problem with battery weight suggesting that fuel cell is a more viable option. Here, the Homtruck offers the full potential of every drive train, including battery swapping to shorten recharging times. The only other company currently revealing such a concept for an electric semi-trailer truck is Baidu. The Chinese internet giant is setting its sights on the market for heavy goods vehicles through its subsidiary DeepWay. For 2023, the company is holding out the prospect of an electric “robot truck”, for which some key data has already been announced, such as a battery change system that is supposed to provide fresh batteries in six minutes.

As for Geely’s Homtruck, speaking at the launch, Chairperson of Geely Holding Group, Eric Li, said, “Farizon Auto’s Homtruck is the result of the synergies between Geely Holding’s technological expertise and its partners in the global automotive industry. The Homtruck represents a significant move towards a net zero-carbon freight transportation system and opens the door to a new era for the logistics industry”.

Tier places order for up to 130 MAN eTGE transporters