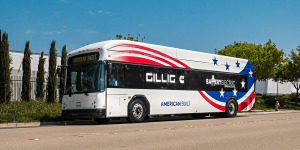 The North American bus manufacturer Gillig will use battery systems from the German supplier Akasol in its electric buses. This includes configurations with 490 kWh, 588 kWh or 686 kWh capacity from 2023, depending on customer requirements.

The next-generation batteries would thus have 32 per cent more energy onboard, according to the Livermore, California-based manufacturer, claiming that the 686 kWh variant has the largest storage capacity on a North American transit bus.

“We recognised how critical range was to our customers, so we performed an extensive market search to identify a system that provides maximum range for those customers who need it, while also providing for modularity for those with shorter duty cycles,” said Ben Grunat, Gillig Vice President of Product Planning & Strategy. “The new battery delivers a 32 per cent increase in onboard energy capacity and therefore a significantly longer range for our customers.”

The transit bus is based on Gillig’s low-floor platform and is up to 40 feet long – the equivalent of 12.2 metres. Gillig says that because the platform has already been in use for years, integration into existing fleets should be seamless. The 40-foot model seats 75 passengers, 38 of whom are seated. A shorter 35-foot version (10.67 metres) accommodates 62 passengers, 31 of whom are seated. The electric drives are supplied by Cummins.

The battery systems manufacturer Akasol, based in Darmstadt, was taken over this year by the US supplier BorgWarner. A US production facility near Detroit was already announced in 2019, which is to go into operation at the end of 2021.

Akasol announced that a framework agreement has now been signed for the partnership with Gillig announced in November. This has a total volume in the low three-digit million euro range and provides for the delivery of the AKASystem 9 AKM 150 CYC battery system in configurations with 490 kWh, 588 kWh or 686 kWh. The AKASystem AKM CYC will be produced in Hazel Park in the US state of Michigan, where the production capacity is to be increased to 2 GWh by the end of 2023.

“We are particularly proud to provide Gillig with our new AKASystem AKM CYC, which is designed for long-distance applications and can be scaled specifically to each customer’s needs,” says Roy Schulde, President of the US subsidiary Akasol Inc.

Production of the Gillig buses is scheduled to start in 2023, according to the Akasol announcement; in November the bus manufacturer had not yet given any details on this.