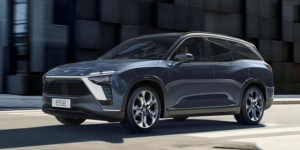 The Chinese electric car manufacturer Nio has presented its financial figures for the third quarter of 2021. Although the still young manufacturer was able to significantly increase its quarterly sales, the bottom line remains in the red.

However, Nio’s bottom line remains in the red, with net loss falling 20.2 per cent year-on-year to 835.3 million yuan (about 113 million euros). Compared to the second quarter of 2021, however, the loss increased by 42.3 per cent. Nevertheless, Nio reports a vehicle margin of 18.0 per cent.

Nio delivered 24,439 electric cars in the reporting period, twice as many as in the same quarter of the previous year and 11.6 per cent more than in Q2 2021. The reason for the slower growth is primarily one-off effects in October: Nio had delivered only around 3,667 vehicles here, otherwise it was usually around 10,000 vehicles in the previous months. According to Nio, however, these are one-off effects due to “restructuring and modernisation of the production lines as well as preparation for the introduction of new products”.

This may also partly explain the increased net loss compared to Q2: The plant conversion costs money, but, at the same time fewer cars are being delivered. In addition, costs for expansion continue to be incurred – for example for the market entry in Norway.

“Our demand continues to be strong and our new orders reached a new record high in October,” says William Bin Li, Nio founder and CEO. “Despite the continued supply chain volatilities, our teams and partners are working closely together to secure the supply and production for the fourth quarter of 2021.”