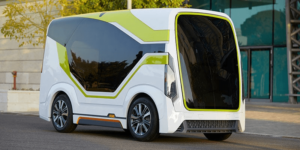 REE Automotive says that their full-scale concept is designed to be flexible for tailoring towards customer needs including last-mile autonomous and delivery fleet operators, retailers and technology companies wanting to build fully autonomous solutions.

REE Automotive envisages fully-autonomous delivery fleets based on the new platform that should enable customers to build autonomous electric vehicles to their exact specifications.

The REE Leopard, based on this platform, is conceived as a last-mile autonomous concept vehicle designed for optimum cargo capacity owing to REE’s low, flat floor. The autonomous shuttle will feature by-wire REEcorner technology for its drive, steer and brake control.

The company from Israel, which will be opening US headquarters in Austin, Texas, says that the Leopard based on this platform has been designed in collaboration with “leading global delivery and technology companies” to cater to both autonomous delivery and Mobility as a Service (MaaS) fleets.

“This concept showcases just one design application of our ground-breaking technology, one that answers the strategically crucial question of how to carry out autonomous, zero-emissions last-mile deliveries, which has huge growth potential,” said Daniel Barel, REE co-founder, and CEO. “Autonomous and electric vehicles ‘Powered by REE’ offer unsurpassed operational efficiency and the lowest total cost of ownership combined with full flexibility when it comes to integrating top hats in virtually any size, shape or form.”

The platform can accommodate a maximum battery capacity of 60 kWh, a peak motor power of 100 kW and a maximum speed of 100 mph or 160 km/h). Since the platform is intended for utility as a delivery vehicle as well as a people mover, the platforms cargo potential is decisive. Here, the platform should accommodate a cargo volume of up to 265 ft3 (7.5 m3) with a maximum payload of up to 1,650 lbs (750 kg).

In announcing the Leopard and its new platform, the company has not revealed where they envisage the production of the new vehicles and platforms. Here, there are a few choices. Currently headquartered in Herzliya, Israel, REE also has an Engineering Center in the UK. The company also says it has subsidiaries in Japan and Germany (without giving further details). Japan is already familiar for REE Automotive since the company already announced earlier this year that it is entering into a development cooperation with Toyota’s commercial vehicle subsidiary Hino Motors.

In North America – as mentioned above – the company announced in July this year that it plans to open its US headquarters and first Integration Center in Austin, Texas. This announcement followed the news of a major partnership with the Texas-based body manufacturer EAVX, which is a subsidiary of JB Poindexter. The partnership is an important step for REE, as the Israeli company is not aiming to manufacture vehicles, instead aiming to be a technology company that supplies a flexible base that can be configured to meet a variety of needs.