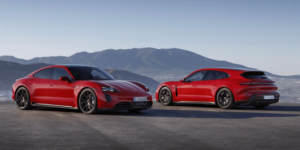 At the LA Auto Show, Porsche presented a new drive variant of its electric sports car Taycan under the abbreviation GTS (Gran Turismo Sport). At the same time, the third body version of the electric car, the Taycan GTS Sport Turismo, was shown.

First of all, the new drive variant: the GTS is positioned between the 4S (360 kW or 390 kW in overboost) and the turbo models (460 kW and up to 560 kW in overboost). The new Taycan GTS also relies on two permanently excited engines (one per axle) and has an output of 380 kW. Porsche states the overboost power with Launch Control at 440 kW, and thanks to 850 Nm of torque, acceleration from a standstill to 100 km/h should take only 3.7 seconds.

Like the Turbo derivatives, the GTS is only available with the large battery with 93.4 kWh gross (83.7 kWh net), which Porsche calls the “Performance Battery Plus”. In the Taycan sedan, the “Performance Battery” with 79.2 kWh (71 kWh net) is also available for the rear-wheel-drive and the 4S. Porsche does not mention the charging power of the Taycan GTS in the announcement – if there had been changes here, that would have been the case. So it remains at up to 270 kW at peak and 22.5 minutes from ten to 80 per cent.

Since the GTS has the more efficient drive strategy of the current Taycan vintage, it is the first derivative to achieve a WLTP range of over 500 kilometres, specifically between 424 and 504 kilometres depending on the equipment. Power consumption is between 20.3 and 24.1 kWh/100km according to WLTP. Porsche had presented the changes for the 2022 model year in August, which should bring more range in everyday driving. Since Porsche has waived a new homologation including an official consumption and range test for the existing Taycan variants, the WLTP specifications for these derivatives have not been adjusted.

Instead, according to Porsche, the adaptive suspension with air suspension has been “tuned specifically for the GTS”, which should benefit lateral dynamics. The optional rear-axle steering is also supposed to have an even sportier setup. Only a test drive will be able to show whether the ride comfort we experienced in the Taycan 4S has suffered as a result of the sportier set-up.

Kevin Giek, who succeeded Stefan Weckbach as Taycan series manager, describes the new GTS as “the golden, sporty middle”. “The Taycan model range has grown steadily since its world premiere in 2019,” says Giek. “Three body variants with up to five engine options offer something for everyone.”

The third body variant, alongside the sedan and the Cross Turismo to be unveiled in March 2021, is the Sport Turismo, also unveiled in LA. This adopts the Cross Turismo’s roofline and enlarged boot, but forgoes its off-road focus in the sills and suspension. According to Porsche, the Sport Turismo is “aimed at those who want a similar level of everyday practicality as the Taycan Cross Turismo, but do not want to forego the ‘on-road’ performance of the Taycan sports saloon”.

In concrete terms, this means that the GTS Sport Turismo also accelerates to 100 km/h in 3.7 seconds and to a top speed of up to 250 km/h. Nevertheless, the headroom in the rear is 45 millimetres higher than in the saloon, and the load volume under the large tailgate is more than 1,200 litres.

Taycan GTS and Taycan GTS Sport Turismo will roll out to dealers in spring 2022, Porsche has not yet published prices for the trade fair premiere. To put things in perspective: with the large battery, the Taycan 4S costs 112,008.60 euros, while the Taycan Turbo will cost at least 153,016 euros. The Sport Turismo will initially only be available as a GTS, with other engine options to follow. It is not known whether this will also include the rear-wheel drive version.