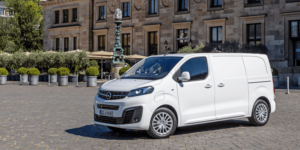 The British mass media and telecommunications company Virgin Media O2 has ordered 280 Vauxhall e-Vivaros. This is the first step towards the company commitment to transition its entire 4,300-strong fleet off fossil fuels by 2030.

Drivers will also be offered charging points in their own homes as part of the move. The British company says it is offering free charging points to its fleet drivers while continuing to deploy charging points alongside its fixed and mobile network rollout across the UK.

Tracey Herald, Head of Corporate Responsibility & Sustainability at Virgin Media O2 said: “We’re eagerly anticipating the Government’s EV strategy and plans for wider infrastructure rollout, and together with Liberty Charge, we’re committed to using our expanding national network and street furniture to help put charging points where they need to be – and drive the UK towards net zero.”

The 280 new Vauxhall e-Vivaros are meant to carry out service and install visits at customers’ homes. The German automotive manufacturer Opel, known as Vauxhall in the UK, has electrified all light commercial vehicles this year. We took a look at the all-electric van Vivaro-e and its passenger car variant, the Zafira-e when our editor took a short test drive with both vehicles in Germany

Virgin Media O2 has also revealed that it will be using its digital capabilities to help reduce transport emissions. The British telecommunications company will be working with the Smart Mobility Living Lab whereby the company is meant to support the development of 5G Connected & Autonomous Vehicles (CAVs). These vehicles will use connected sensors and stream information from one vehicle to another via the 5G Network in real-time, allowing for route planning and enabling smarter driving patterns such as lower acceleration rates and platooning (where two vehicles follow each other closely to reduce aerodynamic drag). Here, as part of its trials, O2 has converted two Renault Twizy electric cars into CAVs. These have been fitted with lidar sensors, to allow autonomous driving as well as remote control functions at low speeds.

GreenMobility heads to cities on the Rhine